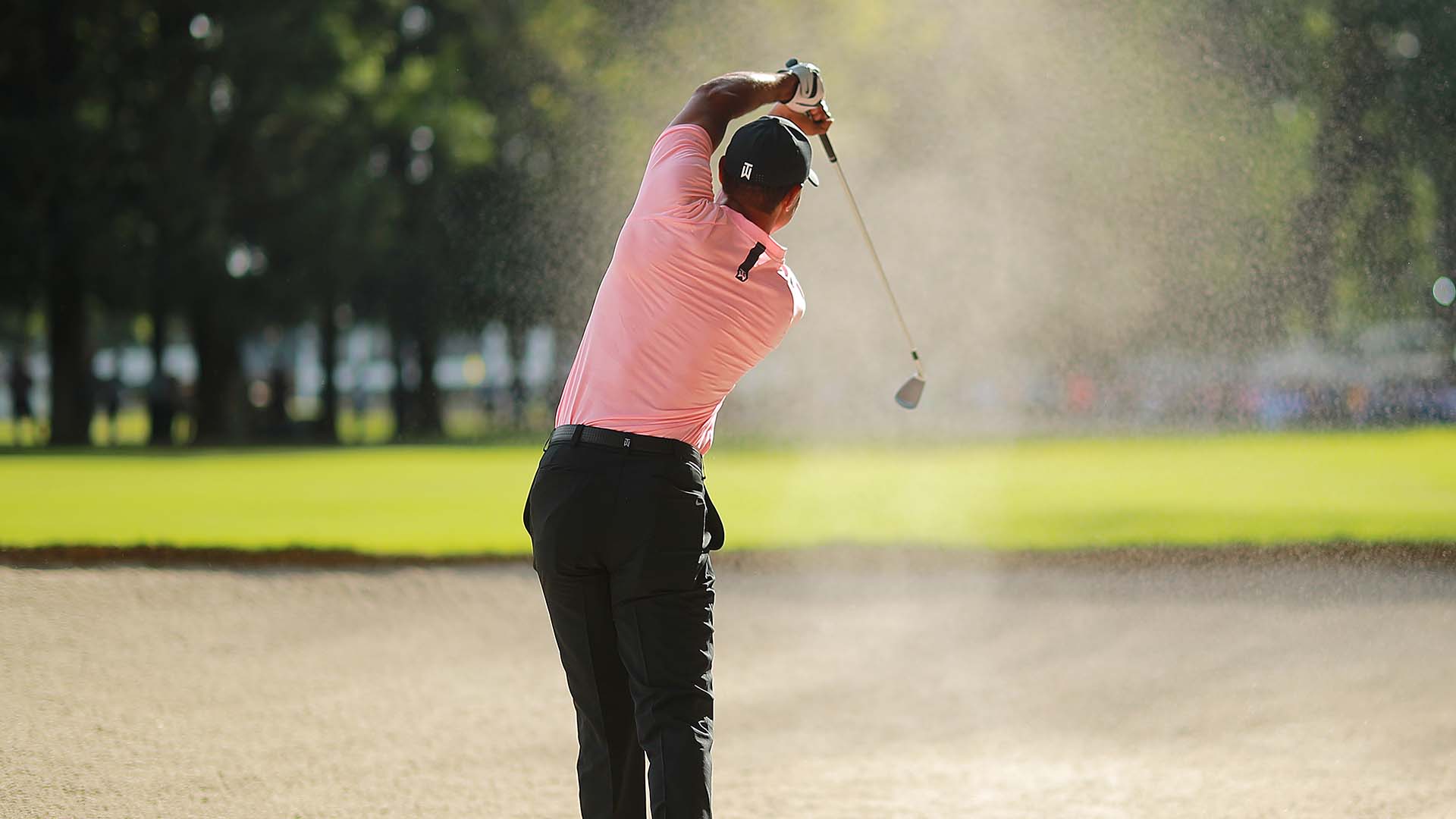 Every year, shots are hit in golf that we remember forever. At least for a for a long while.

Some result in monumental victories. Others are so good that they can only be pulled off by the best players in the world. And then there are some that we retain in our memories for other reasons.

This isn’t just a bunch of holes-in-one and albatrosses!

From Tiger Woods’ winning putt at the Masters (and many more Tiger shots) to Amy Bockerstette’s inspirational sand save in Phoenix, here are the shots that shaped 2019, in no particular order:

Adam Long went head to head with Phil Mickelson down the stretch at the Desert Classic, prevailing after hitting this impressive approach shot from a very awkward lie to set up a winning birdie at the final hole and avoid a playoff.

Hang it in the Louvre!

Tiger Woods is racking up quite the hardware in this article. There’s moving the ball, and then there’s moving the ball like Bubba Watson did on Augusta National’s 10th hole to win the 2012 Masters. Though it didn’t win him a green jacket, this bunker shot by Woods in Mexico – and epic follow-through – produced one of the most iconic shots of the year (see above image). The actual shot wasn’t bad, either.

Romo, man of the people

Tony Romo has gotten some flak for playing in PGA Tour events via sponsor exemptions, but there's no doubt the former NFL quarterback has serious game. He proved it during this year's AT&T Pebble Beach Pro-Am with this shot from the hospitality pavilion at No. 15.

The par-3 16th hole at TPC Scottsdale is one of the most intimidating holes in golf. But for Amy Bockerstette, it was no match, as the 20-year-old Special Olympian made the Par of the Year, getting up and down from the bunker during the Phoenix Open pro-am alongside Gary Woodland and Matt Kuchar. “To step up in front of all the people and the crowd and everything, and to hit the shots that she hit and make par,” Woodland said, “I never rooted so hard for somebody on a golf course.”

OK, so this isn’t exactly a highlight, but of all the poor shots hit this year, none stung more than this. Not only did Rory McIlroy yank his opening tee ball out of bounds on Royal Portrush’s first hole en route to a quadruple-bogey 8, he also shot 79 to end his Open hopes before they even started. Luckily, Shane Lowry was able to give the Irish fans something to celebrate.

As Tiger Woods put together another victorious Sunday at Augusta National, four contenders – Brooks Koepka, Ian Poulter, Francesco Molinari and Tony Finau found Rae’s Creek with their tee balls at No. 12. Molinari’s came when the Italian was leading by two shots and he walked to the 13th tee tied with Woods.

Of course, Tiger Woods’ Masters victory likely wouldn’t have been possible without this crucial approach to 4 feet at the par-3 16th hole, which set up birdie to give Woods a two-shot cushion.

Nine years after his last major victory, Tiger Woods put the finishing touches on major win No. 15 – and green jacket No. 5 – with this 1-foot putt. Who cares if it was for bogey?

When Justin Thomas holed out for eagle on the 16th hole during the third round of the BMW Championship, it shed light on a season-long wager between he and Brooks Koepka. For the holeout, Thomas earned a nice $1,000. Of course, that paled in comparison to the nearly $1.7 million that Thomas collected for winning the season FedExCup playoff event.

Gary Woodland held off Mr. Major, Brooks Koepka, to win the U.S. Open at Pebble Beach. No shot was more memorable than this chip from the fringe at No. 17.

Welcome to the show, Mr. Wolff

After hitting his second shot to the fringe at the par-5 18th hole at TPC Twin Cities, 21-year-old Matthew Wolff appeared likely to go into a playoff at the 3M Open with Bryson DeChambeau and Collin Morikawa. Instead, Wolff, less than two months removed from winning the NCAA individual title, drained the eagle putt to win his first PGA Tour title and automatically earn his place in the big leagues.

In the greatest Solheim Cup finish in history, Europe's Suzann Pettersen, who had been a controversial captain's pick, put an exclamation point on her Solheim Cup legend by sinking the winning birdie putt on the final hole at Gleneagles. Even better: Pettersen announced her retirement shortly after. What an ending!

When hitting bombs nearly results in an ace

For much of the year, hitting bombs didn’t exactly pay off for Phil Mickelson, who finished the season ranked T-165 in strokes gained off the tee. But during the second round of the CJ Cup, Mickelson almost bombed a drive right in the hole at the 353-yard, par-4 14th hole at Nine Bridges. The flagstick, though, had the last laugh.

Most Creative Shot of the Year

During a match against Brandt Snedeker at the WGC-Dell Match Play, Tiger Woods found himself in a position us weekend warriors are quite familiar with. Only difference: Woods actually pulled the shot off, turning the club over and punching his ball out of the bushes left-handed, from his knees, to a few feet.

Better than ‘Better Than Most’

This 70-foot bomb by Jhonattan Vegas from the final round of the Players Championship set the record for longest putt ever made at TPC Sawgrass’ famed 17th hole.

It had some pace – boy, did it have some pace! – but in the end, it dropped, and Hinako Shibuno’s 25-foot birdie make earned the 20-year-old, nicknamed “Smiling Cinderella,” the Women’s British Open title in her first start outside of Japan.

Nothing but the bottom of the cup

It’s not uncommon for tee balls to miss the green at TPC Sawgrass’ island 17th hole. But Ryan Moore’s tee shot in the first round of The Players was a rarity – it flew directly into the hole.

From the rough, over the tree, in the hole

As is the case with most years, 2019 produced its fair share of hole-outs. This one by Jason Day at the Memorial was arguably the most impressive from 100-plus yards out.

Albatross of the Year

Who doesn’t love a good double eagle? Harris English’s hole-out from 236 yards on TPC Sawgrass’ 11th hole is this year’s best, well, according to this article.

Jeff Maggert holed out for eagle on the third playoff hole to win the Charles Schwab Cup Championship. No one was happier, though, than Scott McCarron, who gave Maggert a huge bear hug after Maggert's walk-off secured McCarron the $1 million Schwab Cup bonus.

Jon Rahm brought home both the DP World Tour Championship and Race to Dubai titles with a one-shot victory over Tommy Fleetwood in Dubai, a win that was clinched with this 72nd-hole sand save.

Anything Na can do, Tiger can do…

It’s not often 3-foot putts make a list of top shots, but when they make you laugh as much as these “walk-ins” by Kevin Na and Tiger Woods, they deserve a place.

Of all the players who secured their PGA Tour cards via the Korn Ferry Tour Finals, few did so as emphatically as Doug Ghim. The Texas alum needed to make par on his 72nd hole of the KFT Championship, and he did, delivering a huge fist pump in celebration.

The shots of Brooks Koepka, nude, in ESPN the Magazine’s Body Issue.

Hello, Sam Snead! Tiger Woods tied the PGA Tour record for career wins with his 82nd title at the Zozo Championship. And unlike that closing bogey at Augusta, he sealed the deal with birdie. 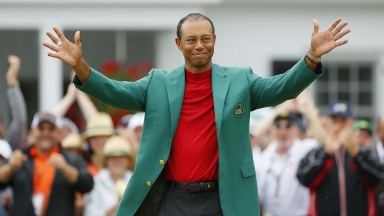 Best of: Tiger moments that stood out in 2019

A look back at Tiger Woods' incredible 2019, both on and off the course. 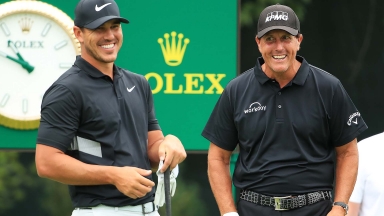 Best of: Social media moments in 2019