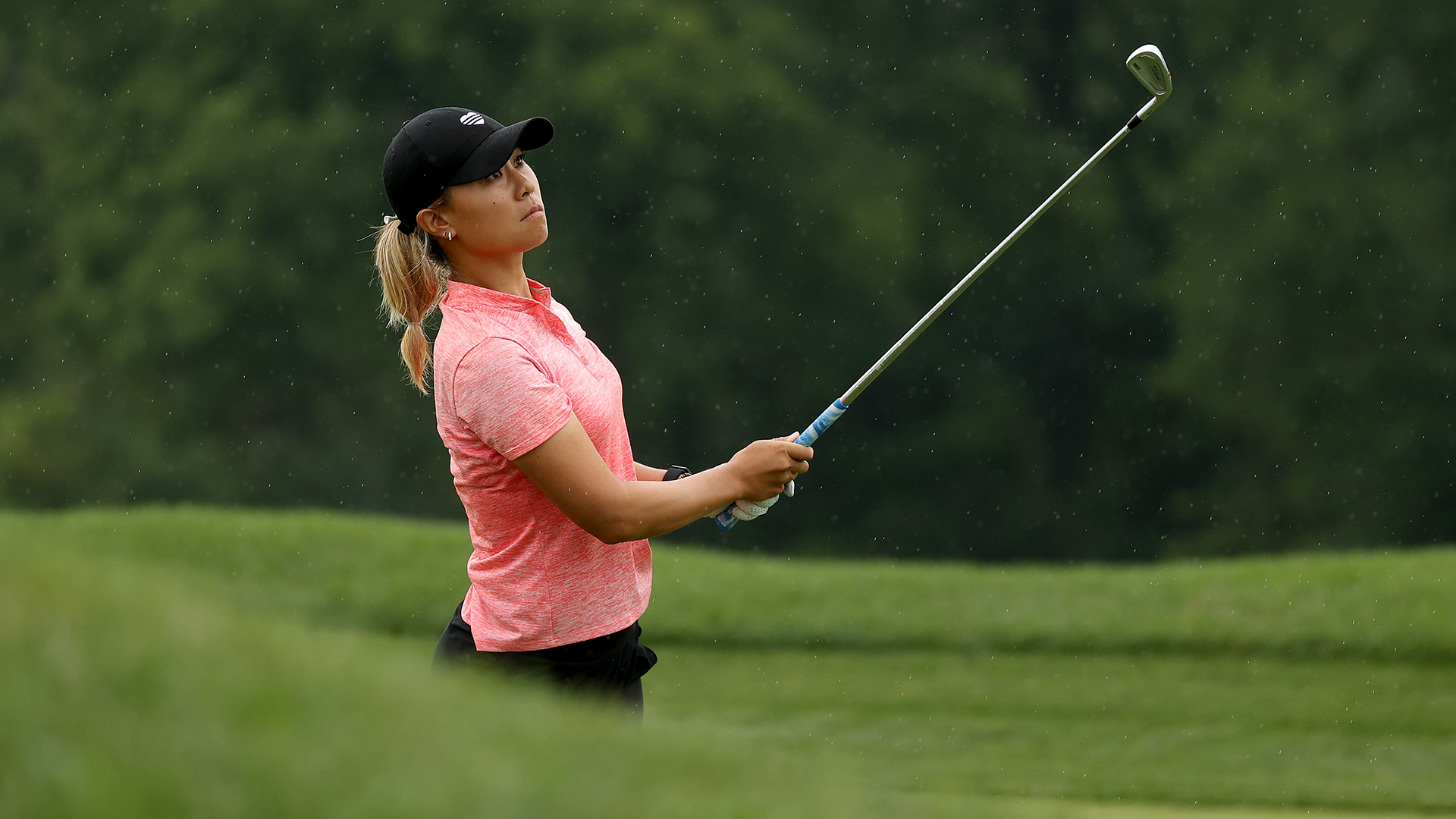 TOLEDO, Ohio – Danielle Kang returned from a 45-minute rain delay with two straight birdies. By the end of the round Saturday, she was happy to have a share of the lead in the LPGA Drive On Championship.

Kang followed her back-to-back birdies with three straight bogeys, another birdie and finally a 4-foot par on the final hole to salvage a 1-over 73 and tie Celine Boutier and Jodi Ewart Shadoff.

Inverness Club, already a tough test that will host the Solheim Cup next year, was even more of a challenge in wet weather and a little more wind. Only two players, including Sarah Schmelzel, broke 70.

Boutier and Ewart Shadoff played in the morning before the harshest of the weather. Boutier had four birdies over her last 10 holes to offset a few mistakes and shot 71. Ewart Shadoff, still searching for her first LPGA Tour victory, overcame a double bogey on the 15th hole with a birdie on the 18th. She shot 72.

They were at 5-under 139 in the LPGA Tour's first event since the Women's Australian Open on Feb. 16. Inverness is hosting the one-time event, with the LPGA staying in northeast Ohio next week before heading to Scotland.

For the leaders, it was all about the recovery.

"I think it was a little bit of lapse of concentration on 15," Ewart Shadoff said of her double bogey. "I just told myself, 'Just try and get a birdie coming in. Even (par) is a pretty solid score out here today."

No one was on a more wild ride than Kang, the No. 4 player in the world and a former Women's PGA champion.

After the delay, she birdied the 11th hole and then found herself in a bunker right of the 12th green with little green between her and the hole. She splashed it out perfectly, it checked up and curled into the cup for an unlikely birdie.

And then the bogeys followed. Kang said it didn't help that her group fell behind and they were being timed for most of the back nine as she tried to figure out how weather was affecting shots while keeping her grips dry.

"There was a lot of rushing for us," she said. "We were on the clock for over 10 holes. I haven't played on the clock for a long time. The golf course conditions are completely different. Yesterday I hit a 7-iron from 180 yards. Today it was a 4- or 5-iron. That was the case for everybody."

Even as she went from leading to trailing, she kept her cool after a third straight bogey, reminding herself she had three holes left.

"I knew I was getting hasty," Kang said. "I started walking slower. I had to give myself a birdie opportunity. On 17, I had the exact same number I had on 15."

She came up well short on the 15th by taking a little off, not knowing how far it would go. She went at it hard on the 17th to set up birdie, and he made the par putt on the final hole to get back into a share of the lead.

Boutier returned with some form, having won the Women's Texas Open in June at Old American, site of an LPGA Tour event later in the year. Boutier, from France, now lives in the Dallas area. Playing in whatever tournaments she could find kept her motivated to practice.

"When you don't have tournaments for three months, sometimes you don't even want to go to the course," she said. "So the fact that I had a couple tournaments, I had something to look forward to and some kind of competition was nice."

The cut was at 6-over 150, and Lydia Ko had to struggle to make it to Sunday in the 54-hole event. Ko opened with a 69 and shot an 80 on Saturday to make it with one shot to spare.

Nelly Korda, at No. 2 the highest-ranked player in the field, had a 74 and made it on the number. Lexi Thompson bogeyed her last hole for a 72 and was at 145, six shots off the lead in a tie for 20th.