The NCAA delayed votes on legislation that would permit college athletes to cash in on their popularity for the first time and to transfer to another school without having to sit out one year.

The issues, originally scheduled to be voted on by the Division I Council on Monday, were expected to be the main storylines of this week’s NCAA annual convention. There was no announcement on when a vote might be taken.

“The Council remains fully committed to modernizing Division I rules in ways that benefit all student-athletes,” said Council chairwoman M. Grace Calhoun, athletics director at Pennsylvania. “Unfortunately, external factors require this pause, and the Council will use this time to enhance the proposals.”

NCAA President Mark Emmert told The Associated Press on Saturday he recommended to the association’s two top governing bodies to put off votes on name, image and likeness and the transfer proposals because of a letter he received from the Department of Justice about potential antitrust violations.

Under the NCAA’s current proposal, schools could block athletes from entering sponsorship agreements that conflict with their schools’ deals. For example, an athlete at a school associated with Nike could be prevented from entering an agreement with another shoe or apparel company. Also, athletes would not be permitted to endorse products or companies such as alcohol or gambling that conflict with NCAA values. 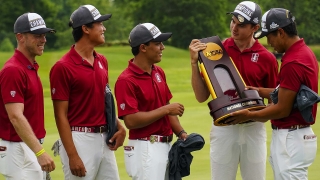 On Tuesday, the NCAA voted unanimously to allow student-athletes to benefit from the use of their likeness. While the spotlight will be on college football and basketball, golf will also be impacted.

Makan Delrahim, assistant attorney general of the DOJ’s antitrust division, wrote the name, image and likeness proposal and the restrictions it put on athletes’ ability to access the free market could be problematic.

Delrahim said the NCAA’s transfer rules could also be in conflict with antitrust laws. A proposal that would loosen restrictions on transferring athletes in high-profile sports such as football and basketball was expected to be passed.

In addition to the DOJ letter, the Supreme Court’s agreement last month to hear an antitrust case involving the NCAA later this year prompted a number of college sports leaders to recommend holding off on a vote.

Another factor is that the turnover in Congress could slow the process of passing federal legislation the NCAA is seeking to create uniformity in NIL rules. A federal law would override differing state laws that go into effect as soon as this summer and provide protection from legal challenges.

“All those things, they would spook a ghost,” said Blake Lawrence, the co-founder and CEO of athlete marketing platform Opendorse. “It’s enough to feel as if there’s something bigger at play, so it does make sense to react with equal weight to the types of challenges that are being tossed at the NCAA right now.”

The NCAA’s proposed NIL legislation would allow athletes to strike financial deals with third parties to do things like endorse or sponsor products, make personal appearances or be an online influencer. Schools would not be involved in the compensation.

Six states have passed bills allowing college athletes to cash in on their names, images and likenesses. Florida’s law is scheduled to go into effect in July. The hope has been for athletes to begin participating in NIL compensation in August.

“The runway is just getting shorter and shorter to get this right,” Lawrence said, “and there are so many moving parts that any delay just further complicates the ability for all the different constituents that are going to be involved in NIL to get it right the first time.”

Ramogi Huma, executive director of the National College Players Association, called the delay a “slap in the face to college athletes.”

“College athletes deserve fair treatment now, and they need lawmakers to grant them these freedoms once and for all,” Huma said.

The proposed one-time transfer rule would allow football players in the Bowl Subdivision and athletes in men’s and women’s basketball, baseball and men’s ice hockey to play immediately rather than sit out for a year the first time they move to another school.

The Justice Department is concerned about certain conditions that could discourage athletes from transferring.

The biggest has to do with athletes being required to notify their current school of their plan to transfer before they can have contact with another school. Once that notice is given, the original school is allowed to take away or reduce the athlete’s scholarship. The threat of that happening could dissuade athletes from even exploring the possibility of transferring.