LAKE OCONEE, Ga. – Technically, yes, there was only one winner on Friday at the inaugural Big Break Invitational Reynolds Plantation, and that man was Jay Woodson.

To be clear, the $100K first-place prize awarded to Woodson is big. So big, in fact, it's the largest check he'll cash thus far in his professional career. At 32, Woodson has Monday qualified into one PGA Tour event (2008 Wyndham Championship) and six Web.com Tour events. Beyond that, he's spent time competing on the NGA Tour, EGolf Tour and the Pepsi Tour. This season, he finished fourth on the NGA Tour money list, having earned $34,752. Don't forget about the $850 he made this year in the Carolina Summer Series.

While Woodson certainly cashed in this week, the money isn't what this win is about.

"When I started playing golf as a little kid, I never played because I wanted to make a lot of money," Woodson said. "But, you need to make money to keep playing, so this is huge and it allows us to keep going and keep pursuing our dream. I definitely think I’m capable of [making it on the PGA Tour], so this just gives us a better opportunity.”

Opportunity ... and a chance to pay some off some debt, his wife Erin joked.

"Pay some bills, that kind of pops in our head," Erin said. "We have a one-year-old son, so just make sure he’s taken care of. It’s probably already spent, but it’ll go to good use."

It was a coincidence that Erin was even here for the biggest payday of her husband's professional career. Her in-laws and parents pitched in to buy her a last-minute ticket from Richmond, Va., where the Woodsons reside, to Georgia on Thursday to make it just in time to watch Jay - the No. 11 seed - in his match against No. 2 seed Mark Murphy.

“He made the cut on the number, and something inside of me just said, ‘That’s where you need to be,'" Erin said. '"You need to be there to support him, no matter if he does well, or if he does bad, just moral support.' So, thank goodness I came, right?"

It was a coincidence Erin was with Jay in the winner's circle on Friday, but it was no coincidence Jay was there after a posting a bogey-free 4-under 68.

"I played with Jay on the back nine, and he made some of the most incredible up-and-downs I've ever seen," Mallory Blackwelder (T-5) said. "I was very happy for him. He's a great guy, super nice to play with."

Perhaps the greatest up-and-down of the day came at the last. Three under heading to the par-5 18th and in the second-to-last group, Woodson knocked his second shot over the green and into a greenside bunker. He hit a near-perfect bunker shot that barely cleared the lip of the bunker, landed on the fringe, and nestled to 6 feet. He drained that for birdie to finish 4 under.

"It was severely downhill and I had a downhill lie in the bunker," Woodson said, "not to mention there was water on the other side [of the green]. ... I probably had a 2-foot circle I could land the ball on to get to where it did. I hit a great shot, but I got lucky, too."

Lucky to win, perhaps, even luckier he was able to share this moment with family. With the people who care about him the most - his fellow "Big Break" competitors.

Sixteen Big Breakers - a combination of the 11 who played Friday and five others who stuck around all week - gathered on the 18th green Friday night to congratulate Woodson. And it wasn't just posing for the cameras. They were truly elated for him.

"Everybody was really happy for him," Blackwelder said. "He's a great guy. ... If I couldn't win, I was happy to see him do it."

Justin Peters, the winner of the first "Big Break," knows a thing or two about Woodson's character, and his assessment is all postive.

"I've known Jay for seven or eight years," Peters said, "and we've been talking about patience all week and making putts. We were both the last two seeds (in match play). I was No. 12 and he was No. 11. We were supposed to both take down the No. 1 and No. 2 seeds. He did his job, I didn't. He finished it off and it was pretty awesome to share that moment with him on the 18th green."

"He is the sweetest, nicest guy in the world," Mary Narzisi said, "and we were just talking about it. Not many people can be upset with Jay winning this. As a competitor, you always want to be like, 'I wish that was me.' But this could not have happened to a better guy."

No better guy and no better way to head into Q-School - with momentum and validation. Woodson heads to first stage of Web.com Q-School next week in Atlanta. Bigger and better things on the horizon for Woodson, and for all the Big Breakers after a feel-good week at Reynolds Plantation.

“I think the week was phenomenal, Woodson said. "This is such an awesome tournament. The course was absolutely perfect. All of the volunteers and everyone at Reynolds Plantation and MetLife have been phenomenal. I would play in this event every year if they let me.”

Good news, Jay: You're a lock for 2015. The better news? You're a member of the Big Break family for life. 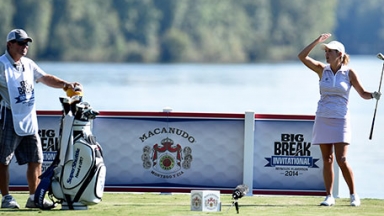 Mallory Blackwelder nearly made an ace at the par-3 17th on Wednesday, just missing out on $25K. 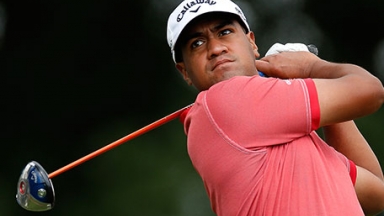 Give Me a Break

If you thought the Big Break Invitational was fun and games, you were wrong. Players mean business this week. 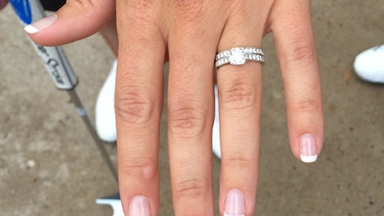 Newlyweds Mallory Blackwelder and Julien Trudeau could face off against each other for the Big Break Invitational title. It's a duel they welcome.