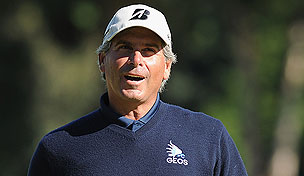 This week the PGA Tour heads to Riviera Country Club for the Northern Trust Open. Defending champion Aaron Baddeley and many of the world's best golfers will look to conquer the course known as 'Hogan's Alley,' which ranked among the top 10 most difficult on Tour in 2011. With that in mind, here is a look inside the numbers to see which players may contend for the title this week and help your Golf Channel Fantasy Challenge team in the process:

• World No. 1 Luke Donald makes his 2012 PGA Tour debut this week at Riviera. This event has been feast or famine for him in recent memory; in 10 starts here since 2002, Donald has recorded five top-15 finishes along with four missed cuts.

• Jason Kokrak will look to build upon a strong performance at Pebble Beach last week. Rebounding well after three consecutive missed cuts, Kokrak led the AT&T field in greens in regulation, finished T-2 in birdies and sixth in driving distance en route to a T-9 finish - best among Tour rookies.

• Fred Couples will be making his 30th career start in this event. When Couples first teed it up at Riviera CC in the 1982 Los Angeles Open, Tom Watson came from behind to defeat Johnny Miller in a playoff for the title.

• Group 2 golfer Greg Chalmers will hope that recent form trumps past experience this week. In four NTO starts since 2002, Chalmers' best finish has been T-55. He is off to a solid start in 2012 though, particularly around the greens, ranking fifth on Tour in sand save percentage, seventh in total putting and ninth in strokes gained putting.

• Those looking for a 'safe' option for their Group 1 selection this week should consider K.J. Choi. The 2011 Players champion has never missed a cut at Riviera, including three top-10s in the last four years. Choi has a 69.93 career stroke average in this event; only Fred Couples and 2001 champion Robert Allenby have a lower stroke average across more rounds at Riviera CC.

• In recent years, creating birdie opportunities has been a key metric for overall tournament success here, as each of the past six NTO champions finished the week in the top 10 in greens in regulation. This bodes well for Bubba Watson, currently second on Tour in GIR and coming off a strong T-5 showing in Phoenix two weeks ago.

• FedEx Cup points leader Kyle Stanley will look to continue a strong sophomore campaign in his first start since winning the Waste Management Phoenix Open. Stanley's well-rounded game is evident, as he ranks in the top 10 on Tour in driving distance, greens in regulation percentage and birdie average while carding 10/15 rounds this year in the 60s.

• South African Tim Clark will be making his first start in nine months after an elbow injury sidelined him for most of the 2011 season. Clark, who had surgery on the elbow in August, has had prior success in this event, posting three top-15 finishes in seven career starts.

• Jeff Overton will also be returning from injury, albeit a more minor one, as a bad wrist forced him to withdraw in Phoenix two weeks ago. He will look to a hot putter to help tame the poa annua greens of Riviera; Overton currently ranks fourth on Tour in total putting and has made 76 percent of his putts this year from 5-10 feet, currently the best on Tour from that distance.

• Bryce Molder has leaned on a strong short game in posting three top-15 finishes in five starts this year, and will need it again this week as he battles the kikuyu rough around the greens at Riviera. Molder has gotten up and down when it counts, though, ranking second on Tour in scrambling and compiling a 68.67 final round stroke average.

You can watch complete coverage of the Northern Trust Open Thursday-Friday live on Golf Channel from 3PM-6PM ET.