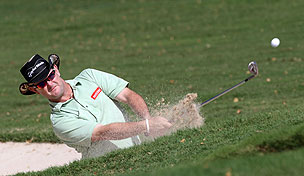 Getty Images
EVIAN-LES-BAINS, FRANCE - JULY 26: Caroline Rominger of Switzerland plays her approach shot on the first hole during the final round of the Evian Masters at the Evian Masters Golf Club on July 25, 2009 in Evian-les-Bains, France. (Photo by Stuart Franklin/Getty Images)  -

For the third week in a row, fantasy golf fans will need to divide their attention between two events with star-studded fields. The PGA Tour heads to iconic Pebble Beach for the AT&T Pebble Beach National Pro-Am, while the European Tour concludes their Desert Swing at the Omega Dubai Desert Classic. Participants in the Golf Channel Fantasy Challenge will need to do their homework before they submit lineups for each event this week. With that in mind, here is a look inside the numbers to see which players may contend for the title(s) this week and help your fantasy team in the process:

• Jim Furyk will be making his 2012 PGA Tour debut at Pebble Beach this week. Prior to missing the cut here last year, Furyk had posted six consecutive finishes inside the top 40 at this event, highlighted by a T-6 finish in 2007.

• Rory Sabbatini will look to a hot putter to help continue his strong start in 2012. The South African ranks first on Tour in putts per round, fifth in strokes gained putting and seventh in total putting. It's not surprising, then, that Sabo has finished inside the top 30 in each of his first three starts this year.

• With none of the three courses in the Pebble Beach rotation this week stretched beyond 6,900 yards, an emphasis will be placed on tee-to-green ball striking above driving distance. Expect Roberto Castro to continue a fine start to his rookie season, as he ranks 20th in total driving and 9th in driving accuracy. Castro has improved his finish in each of his first three starts this year, a trend that will put him in contention this weekend should it continue.

• Martin Kaymer returns to another venue in the Middle East that seems to fit his game. With three top-4 finishes in four Dubai starts, there is reason to think that Kaymer's result this week will be closer to last week's T-9 in Qatar than the unexpected MC he posted in Abu Dhabi.

• Bob Estes may be feeling the pressure this week, as he needs to earn $18,062 between his next two starts to move into the Major Medical Exemption category. Estes has a strong track record at this event, though, finishing T-4 in 2009 and T-16 in 2010.

• If searching for a sleeper pick in the Dubai field, you may want to give Group 4 golfer Bradley Dredge a second look. Since 2002, the Welshman has finished in the top 20 an impressive eight times at this event, including a T-10 showing last year.

• Tom Gillis will look to a venue where he has had recent success to help get his 2012 season on track. The Group 3 journeyman has missed each of his first three cuts this year but finished in the top 10 at Pebble Beach each of the last two years, including a third place finish in 2011.

• Few in the field this week can rival the Dubai resume of Miguel Angel Jimenez. The Mechanic will be making his 20th start in this event on Thursday, and has six top-10 finishes to his name - including a victory here in 2009.

• Not surprisingly, one of the keys to success at Pebble Beach over the years has been finding the green in regulation. Last year, eight of the top 14 names on the leaderboard were also in the top 10 in GIR for the week. This bodes well for a player like John Mallinger, who has hit better than 75% of the greens in regulation so far in 2012. The runner-up at the Humana Challenge last month, Mallinger also finished T-3 in this event in 2008.

• Nicolas Colsaerts is quietly putting together a strong start to his 2012 campaign, with last week's T-9 finish in Qatar his second top-10 finish in three starts. The Belgian ranks second on the European Tour in driving distance, has hit the green in regulation nearly 77% of the time and may very well contend for the title this week in Dubai.