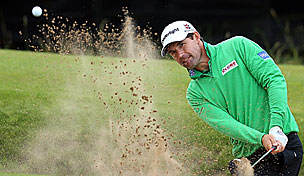 While the PGA Tour begins its Fall Series (our Power Rankings for the Justin Timberlake Shriners Hospitals for Children Open can be found here), many of the best in Europe will contest the Alfred Dunhill Links Championship. Played across three of the game's most famous courses, players will conclude the event on Sunday at the Old Course at St. Andrews.

Michael Hoey returns as defending champion this week, having beaten Rory McIlroy by two shots for the title last year. Here are ten players to watch this week in Scotland:

1. Padraig Harrington: The Irishman's record in this event is unparalleled, with two wins ('02 and '06) to go along with four other top-10 finishes in 11 starts. Having just watched his fellow Europeans celebrating at Medinah, Paddy may be out to prove his exclusion from the team was a mistake.

2. Louis Oosthuizen: Along with Nick Watney, Oosthuizen was one of two players who finished in the top 10 of the final FedEx Cup standings but did not play in the Ryder Cup. A winner this year in both South Africa and Malaysia, Oosthuizen also had a pair of runner-up finishes in the States, including a playoff loss at The Masters. It's fair to say he has a few good memories to rely upon when playing the Old Course.

3. Dustin Johnson: One of the few bright spots for the Americans on Sunday at Medinah, DJ more than acquitted himself well as a captain's selection. He brings with him momentum from a solid performance during the FedEx Cup playoffs and his runner-up finish at the 2011 British Open shows he is able to golf his ball on both sides of the Pond.

4. Martin Kaymer: What better way to turn around a mediocre season than to win the Ryder Cup for your continent? Kaymer did just that Sunday with his putt on the 18th green, and returns with renewed confidence to an event he won two years ago.

5. Paul Lawrie: The Scot was a surprising 5&3 winner Sunday over Brandt Snedeker and now heads back home to Scotland to play a course rotation that includes Carnoustie, site of his '99 British Open triumph. Lawrie has won twice in Europe this year, and also won the inaugural edition of this event in 2001.

6. Simon Dyson: Dyson may not be a household name in the States, but his track record in this event is excellent: a win in '09, T-5 in '10 and T-9 last year. He's currently 25th on the European Tour in driving accuracy and 41st in GIR percentage.

7. Peter Hanson: Along with Kaymer, Johnson and Lawrie, Hanson makes the trip this week from Chicago to Scotland. He won in his last European Tour start at the KLM Open last month and currently leads the Tour in putts per GIR.

8. Matteo Manassero: The young Italian finished T-22 here two years ago and his game has steadily improved since then. Manassero has six top-10 finishes this year in Europe, including a T-3 finish at the BMW Italian Open in his most recent start last month. He is currently 26th on Tour in stroke average and ninth in putts per round.

9. Danny Willett: A runner-up here in 2010, Willett broke through with a win this summer at the BMW International Open. In his last two European Tour starts, the Englishman was a runner-up at the Omega European Masters and in the top 10 after each of the first three rounds at the KLM Open before a Sunday 75 dropped him back to T-26.

10. Marcel Siem: The German won earlier this year in France and recorded a pair of top-20 finishes in his last two European Tour starts. He currently stands 12th on the European Tour in stroke average, 16th in driving distance and 22nd in putts per GIR.