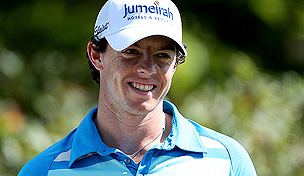 The FedEx Cup playoffs reach their third leg, as the PGA Tour heads to the state of Indiana for the first time since the 1991 PGA Championship. The top 70 golfers in the standings will tee it up at Crooked Stick, but only the top 30 after this week will make the season-ending Tour Championship.

Justin Rose enters as the defending champion, having won last year's event at Cog Hill outside Chicago. Here are 10 players to watch this week:

1. Rory McIlroy: Top-ranked player in the world, hottest golfer on the planet and entering with a pair of wins in his last three starts. His is the top name to watch until otherwise noted.

2. Dustin Johnson: His recent good play was rewarded Tuesday with a Ryder Cup selection. Johnson has three top-10 finishes in his last five starts, and his length off the tee will be an asset on a course that can be stretched to more than 7,500 yards.

3. Louis Oosthuizen: The South African came up just short at TPC Boston, but now has three top-5 finishes in his last four events. Oosthuizen has led the field in GIR percentage each of the last two weeks.

4. Jason Dufner: Still one of the most consistent fantasy options available. Six top-20 finishes in his last eight starts dating back to May for Dufner, who is currently second on Tour in ball striking and third in scoring average.

5. Tiger Woods: Carded four rounds in the 60s last week for the first time in three years. With four top-11 finishes in his last five starts, Tiger's recent good form is well-documented; so too is his underwhelming record on Pete Dye-designed courses.

6. Brandt Snedeker: Perhaps the hottest putter on Tour, Snedeker has now punched a ticket to his first Ryder Cup on the heels of top-10 finishes in each of the first two playoff events. His name should remain near the top of the leaderboard as long as the putts continue to drop.

7. Sergio Garcia: Garcia has a win and a T-3 finish in his last two starts, and should be fresh after skipping the Deutsche Bank last week. Although at different courses, the Spaniard has thrived in the third leg of the playoffs; a T-20 showing at Bellerive in 2008 is his worst finish in four career BMW starts.

8. Lee Westwood: Followed up a T-5 finish at Bethpage with a T-13 showing in Boston. One of the most consistent players tee-to-green, Westwood now leads the Tour in GIR percentage.

9. Jeff Overton: Overton is playing a home game this week. Born in Evansville and still living in nearby Bloomington where he went to college at Indiana, Overton is coming off a T-7 finish in Boston and will have the crowds behind him all week long.

10. Phil Mickelson: Did a new putting grip help Lefty find his game last week? His T-4 finish was his best result since The Masters and first top 10 since May. Mickelson had a good week on the greens in Boston, finishing fourth in both putts per GIR and strokes gained putting.