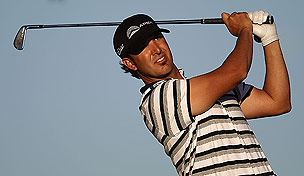 With the FedEx Cup playoffs in the rear view mirror, the PGA Tour now begins its Fall Series with the Justin Timberlake Shriners Hospitals for Children Open. A full field will tee it up this week in Las Vegas with goals ranging from securing 2013 tournament exemptions to solidifying a Tour card for next year.

Kevin Na returns to TPC Summerlin as the defending champion. Here are 10 players to keep an eye on this week in the desert:

1. Scott Piercy: The Las Vegas native will have the support of the crowds this week. After making it all the way to East Lake, Piercy is playing with house money for the rest of his 2012 season. His long tee shots and ability to go low (currently seventh on Tour in total birdies) should help keep his name near the top of the leaderboard this week.

2. Ryan Moore: Like Piercy, the former UNLV standout is playing a bit of a home game this week. Having nearly won the Tour Championship only two weeks ago, Moore enters with significant momentum and will look to build on his playoff run that ended with three straight top-10 finishes.

3. Chris Kirk: Kirk has quietly compiled a very solid second half to his season, with six top-30 finishes in his last eight starts dating back to July. Among the leaders on Tour in birdie average (14th) and GIR percentage (35th), there is reason to suspect his good play will continue this week.

4. Nick Watney: The Barclays champ failed to capitalize on the momentum of that win during the playoffs, finishing 28th out of 30 at East Lake and breaking 70 only once across his final nine rounds. But Watney was runner-up here last year and T-6 a year prior, and if he re-discovers the putter that was on display at Bethpage he will likely be in contention down the stretch.

5. Robert Garrigus: The long-hitter finished the playoffs with back-to-back top-10 finishes at Crooked Stick and East Lake. Currently third on Tour in driving distance and 10th in both birdie average and GIR percentage, Garrigus figures to factor this week on a course where he finished T-3 in 2007 and T-16 a year ago.

6. Kyle Stanley: Has yet to shoot higher than 69 in eight career rounds at TPC Summerlin. Currently inside the top 10 on Tour in both driving distance and par-5 performance, his aggressive game should suit him well this week.

7. Kevin Na: Na returns this week to TPC Summerlin, where he led the field last year in both birdies and putts per round en route to victory. He has six top-10 finishes this year, but only one has come since he started tinkering with his pre-shot routine after false starts plagued him at The Players.

8. William McGirt: After opening with 63, McGirt finished T-16 here last year in his first appearance. A strong July propelled him into a career-best three playoff events last month, and McGirt will look to this week to continue the momentum. He currently sits inside the top 50 on Tour in both GIR percentage (46th) and strokes gained putting (44th).

9. Davis Love III: The crestfallen American Ryder Cup captain may find solace in getting back inside the ropes. His record in Vegas includes a win along with six other top-10 finishes.

10. George McNeill: Few players in this week's field have had more success here than McNeill. A winner in 2007, he added a runner-up finish two years later and has been outside the top 15 only once in five career starts at TPC Summerlin. Although he's struggled of late, friendly confines may help spark McNeill to his first top-20 finish in five months.