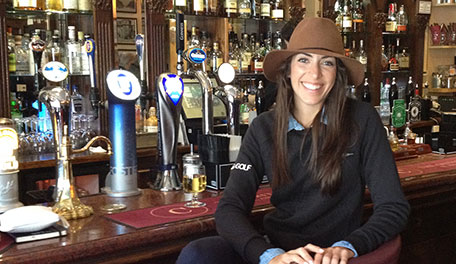 I believe the idea originated from our managing editor Mercer Baggs. But not even his imagination could so dutifully or beautifully construct what turned out to be the greatest week of my professional life.

Baggs' idea was this: As a way to further generate attention during Open Championship week, and as a way to provide original, feature content to supplement news coverage, GolfChannel.com would send me to the 144th Open Championship at St. Andrews to cover the action going on outside the ropes. So away I went, to cover my first major championship.

I – as one member of a team that included three other writers – arrived to St. Andrews first. To help out with the news coverage before the other writers arrived, I sat in on the news conference Monday afternoon where Dustin Johnson spoke for the first time about what transpired at Chambers Bay. He maintained what was in the past was in the past. I believed him, and in his chances of winning the Open.

On Monday night, I set out at 9 p.m. (yes, you read that correctly) and walked all 18 holes of the Old Course, examining the eyelines from the tee boxes and the nuances of the greens. My 18 hole expedition concluded at 10:30 p.m., just as the last of the sunset vanished on July 13th.

On Tuesday, my assignment was to eat and drink my way around St. Andrews. I repeat: My boss told me to eat and drink all day, to take photos and document it, then come back and write about it for the website. I ran into Chris Como at the Jigger Inn and ate a fish sandwich the size of my face, among various other highlights.

On Wednesday, I answered the age-old conundrum: How do you drop 100 pounds ... and fast?!

On Thursday, I watched the Open from the best seat in the house.

On Friday, I sat back and listened, and brought you the mundane and somewhat profane things that I overheard while walking around St. Andrews.

On Friday night, when Tom Watson played his 38th and final Open, I sat in the press center afterward, listening to the eight-time major champion speak of the joy and happiness he felt as he walked across the Swilcan Bridge, competitively, one final time.

On Saturday, when the winds were whipping and the greens glacier-quick, no golf was played. Fans flocked to bars. Of course, I had to follow.

On Sunday, I did as the Scots do and watched the Open at a house party adjacent to the 18th fairway.

And on Monday, when it seemed the impossible was entirely possible ... that Jordan Spieth was going to win the Open, I was there. Ultimately, his bid to win his third consecutive major came up inches short, and when it did, I was in the press tent filing blogs and helping cover the news. The biggest "party" of my week thus far - truly in the thick of things as a reporter at a major championship.

On Tuesday - you didn't think my adventures stopped there, did you? - I played Muirfield. I made pars at 16 and 17, and had drinks on the patio afterward with a member and friends.

On Wednesday, it was time to fly home. I was grateful for the experience, but melancholy that my time was up. As I was boarding the flight from London (I had flown Edinburgh to London) to Orlando, the gate agent stopped me, reprinted my ticket and told me I was now in first class. I glanced to my right. I glanced to my left. Was this for real?

I proceeded on-board and nestled into my first class accommodation, readying myself for the 10-hour journey home. There could have been no more fitting end to the greatest week of my life.

And just in case it is unclear to Mercer Baggs or any of my other bosses, I'd be "open" to the idea of covering another Open the future.