Getty Images
JERSEY CITY, NJ - SEPTEMBER 30: Si Woo Kim of South Korea and the International team plays his second shot from the water's edge on the 18th hole on the 18th hole in his match with Anirban Lahiri against Charley Hoffman and Kevin Chappell of the United States during the Saturday afternoon fourball matches in the 2017 Presidents Cup at the Liberty National Golf Club on September 30, 2017 in Jersey City, New Jersey. (Photo by David Cannon/Getty Images)  -

For the second straight week, a major champ from 2010 is in position to win once again on the PGA Tour. This time it's Louis Oosthuizen, who shares the lead heading into the final round of the HP Byron Nelson Championship:

What it means: A number of players held at least a share of the lead throughout the afternoon, but Oosthuizen got it to double digits thanks to a birdie on the home hole. He was tied by Morgan Hoffmann before Hoffmann fell apart on the final hole, but Todd got to 10 under when his final approach landed less than 4 feet from the hole. Nine players will begin the final round within two shots of the lead.

Round of the day: Oosthuizen began with two bogeys across his first four holes, but quickly got things turned around. He rattled off three straight birdies on holes 5-7 and added five more on the back nine, concluding a 6-under 64 with a short birdie putt on the 18th hole. Oosthuizen now has shot 68 or better in each of the first three rounds at TPC Four Seasons.

Best of the rest: Hahn hasn't had much go his way this season, but he vaulted into contention with a back-nine birdie blitz during the third round. Hahn made five straight birdies, capping his streak with a two-putt birdie on No. 16, to highlight a 5-under 65. He'll now enter the final round in position to contend for his first PGA Tour win.

Biggest disappointment: Paul Casey blistered the back nine during the second round, but failed to replicate that form Saturday. Casey went seven holes without a par on the front side but made more bogeys than birdies, carding a 3-over 73 that was 10 shots higher than his second-round total. At 3 under, he now trails by seven shots.

Main storyline heading into Sunday: This remains anyone's game, but the sentimental story is likely Weir. The former Masters champion hasn't won since late 2007, but this week has shown signs of his former game despite his ranking at No. 609 in the world. Should he find a way to pass Oosthuizen and Todd, it would be one of the biggest golf stories of the year.

Shot of the day: Reigning U.S. Junior Amateur champ Scottie Scheffler is making his PGA Tour debut this week and created quite the highlight in the third round. The 17-year-old aced the par-3 second, holing a 5-iron from 218 yards, en route to a 1-under 69. Surprisingly, it's just the sixth hole-in-one on the PGA Tour this season.

Louis Oosthuizen and Lee Westwood are not sporting the UPS logo this week at the PGA Championship. 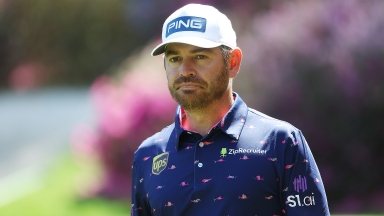 Louis Oosthuizen withdrew from the Masters on Friday, citing injury. The absence left Tiger Woods as part of a twosome. 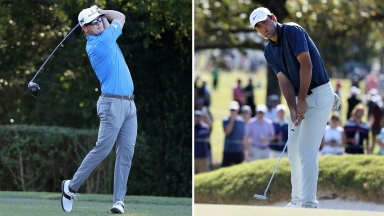 Odds and value picks for the RSM Classic

Scheffler, Oosthuizen and Simpson are PointsBet's favorites, but there are plenty of other names to keep an eye on this week.