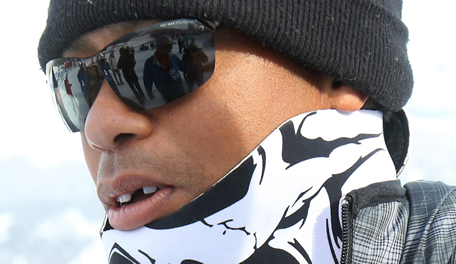 Tiger Woods surprised Lindsey Vonn on Monday in Italy, showing up at the finish line of her record-breaking win. He surprised the rest of us with his apparent lack of a front tooth.

Woods' agent Mark Steinberg released a statement Monday afternoon explaining the situation: "During a crush of photographers at the awards podium, a media member with a shoulder-mounted video camera surged toward the stage, turned and hit Woods in the mouth. Woods’s tooth was knocked out by the incident."

But race organizers are telling the Associated Press the incident was never reported. Woods did request extra security and a snowmobile to exit the finish area and organizers say they met both requests. Nicola Colli, the secretary general of the organizing committee, told the AP: "I was among those who escorted him from the tent to the snowmobile and there was no such incident."

The tooth in question happens to also be Woods' dead tooth that had turned considerably more yellow than the rest, as evidenced in this picture from the PGA Championship in August.

Woods is scheduled to start his 2015 season in two weeks at the Waste Management Phoenix Open. It is unlikely Tiger's back will be the first topic of discussion.