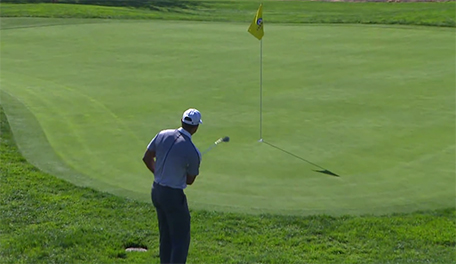 Tiger Woods' short-game saga has turned back into a health saga. Woods withdrew from the Farmers Insurance Open on Thursday after only 11 holes, explaining that multiple fog delays had bothered his surgically repaired back.

Before attention returned to his physical well-being, Woods' shaky short game was still the focus at the start of his round.

Starting on the back nine of the North Course, Woods short-sided himself left the of the 10th green, immediately testing his wedge play on his opening hole. The result was a blade 35 feet past the pin:

After hitting his first three shots all over the map on the 11th hole, Woods was once again short-sided and facing a delicate up and down just to save par. The result, compared with his recent struggles, was simultaneously encouraging and baffling:

Just when there was even the smallest sign that Woods was figuring things out, he gingerly bent down to remove his ball from the hole and then grimaced in pain on his next swing, the tee shot at 12.

Nine holes later, he was carted off.