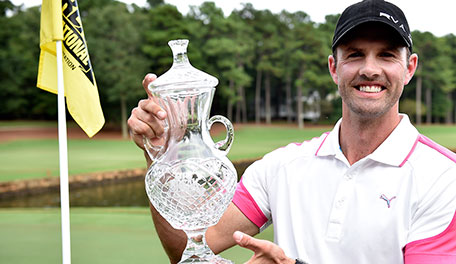 LAKE OCONEE, Ga. – What would a Big Break finale be without some drama?

"It's still a little in shock," Woodson said immediately following his win. "I knew what I was capable of doing and was confident in my abilities and [could] make it from one cut to the next - make it to the match play, make it to the final round, and let things happen from there."

Three under heading to the par-5 18th and in the second-to-last group, Woodson knocked his second shot over the green and into a greenside bunker. He hit a near-perfect bunker shot that barely cleared the lip of the bunker, landed on the fringe, and nestled to 6 feet. He drained that for birdie to finish 4 under.

"It was severely downhill and I had a downhill lie in the bunker, not to mention there was water on the other side [of the green]. ... I probably had a 2-foot circle I could land the ball on to get to where it did. I hit a great shot, but I got lucky, too."

Around that same time, Emily Talley, playing in the final pairing, made double bogey at the par-3 17th to drop from 4 under to 2 under.

Talley and Finau both made birdies at the 18th to finish at 3 under and 2 under, respectively, but it was Woodson's dramatic birdie finish that secured the title.

"It's huge for my confidence," Woodson said, "knowing I can play this well under those conditions and under those circumstances. Tony Finau is going to have a great career on the PGA Tour and Tommy Gainey is already a PGA Tour winner. To go head-to-head with these guys and to outlast them for a week-long tournament - that's good."

The first two rounds of the Big Break Invitational were Modified Stableford, followed by match play Thursday, and a stroke-play finale.

Woodson - the No. 11 seed in match play after two rounds of Modified Stableford, advanced to Friday's final by beating No. 2 seed Mark Murphy on Thursday, 5 and 4. 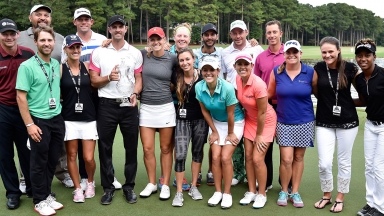