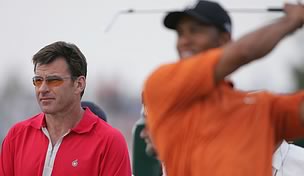 With the start of this year's Ryder Cup now only two weeks away, the most successful player in the event's history thinks the two teams may be destined for their first 14-14 tie in 23 years.

Nick Faldo, a member on 11 European Ryder Cup teams and captain of the squad in 2008, told Reuters that he thinks a stalemate may be looming later this month.

'On paper I think it's incredibly evenly matched,' said Faldo. 'Half-jokingly I said at the beginning of the season that we haven't had a tie for quite a while but suddenly now that notion doesn't seem so far off. Maybe a tie could be the result this year.'

Team Europe won the Ryder Cup in 2010 by a single point, 14.5-13.5, and as a result would retain the trophy in the event of a tie. The Europeans also kept the Ryder Cup at The Belfry in 1989, the last time the biennial matches ended in a draw.

This year's Ryder Cup will take place Sept. 28-30 at Medinah CC outside Chicago. Five members of Europe's 12-man squad will spend next week at East Lake for the Tour Championship, while all 12 members of the U.S. team will be in the field for the 30-man event.