Barkley: Tiger should 'go ballistic' on Norman over comments 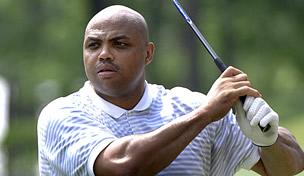 Getty Images
KINGSBARNS, SCOTLAND - SEPTEMBER 30: Alvaro Quiros of Spain gestures on the sixth hole during the final practice round of The Alfred Dunhill Links Championship at Kingsbarns Golf Links on September 30, 2009 in Kingsbarns, Scotland. (Photo by Andrew Redington/Getty Images)  -

Apparently not everyone agrees with Tiger Woods' decision to take the 'high road' in light of comments made by Greg Norman earlier this week.

In a radio interview with 'The Waddle & Silvy Show,' former NBA MVP Charles Barkley insisted that Woods should 'just go ballistic' on Norman over the Aussie's comments regarding Tiger's relationship with World No. 1 Rory McIlroy.

Barkley claimed that he was 'disappointed' in Woods over his lack of response to the situation. 'How long is he going to let people say anything to him, about him?'

Earlier this week, Norman claimed in an interview that Woods was 'really intimidated' by McIlroy, who has won each of the last two FedEx Cup playoff events and currently leads the points race.

Never one to hide his opinion, Barkley said he would prefer to see Woods address Norman directly about the comments. 'I'm not a high road guy,' said Barkley, formerly a star on 'The Haney Project.' 'I wanted him to come out and really blast Greg Norman.'

Paired with McIlroy for the fifth time during the FedEx Cup playoffs, Woods shot an opening-round 66 for a share of the lead after the first round of the Tour Championship. McIlroy fired a 1-under-par 69 and begins Friday's second round tied for 12th among the 30-man field.