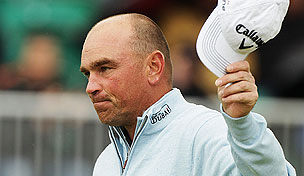 Getty Images
AVONDALE, LA - APRIL 22: Jason Bohn stands on the 14th hole during the first round of the Zurich Classic at TPC Louisiana on April 22, 2010 in Avondale, Louisiana. (Photo by Chris Trotman/Getty Images)  -

Though he’s already been named one of four vice captains for the European Ryder Cup team, Thomas Bjorn hasn’t yet abandoned the idea of playing his way into a wildcard selection.

“I don’t think when Jose Maria (Olazabal) asked me to be a vice captain he was ruling me out of playing on the team,” Bjorn said Wednesday, according to the AFP. “So, I think he realizes that there are certain people, if they go and play well and win this week, he’ll have to think about them.”

Bjorn, currently 16th on the European World Points list, is the defending champion at this week’s Johnnie Walker Championship, the final event to qualify for the team. It’s not inconceivable that the 41-year-old Dane could play his way into a roster spot – but it probably would take another victory this week at Gleneagles.

Two years ago, Edoardo Molinari won the Johnnie Walker but still finished one spot away from automatically qualifying. Colin Montgomerie, the 2010 Ryder Cup captain, promptly used one of his captain’s picks on the Italian.

“If you come here and feel like you’ve got a chance, and you win, then you probably deserve a spot,” Bjorn said, according to the report.