Colsaerts with chance to lock up Ryder Cup spot 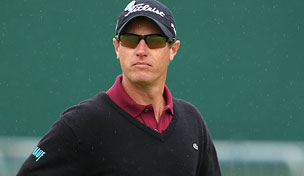 Sergio Garcia did his part, winning the Wyndham Championship on Monday to secure his spot on the European Ryder Cup team.

Now, back across the pond, Nicolas Colsaerts is hoping to follow suit.

The long-hitting Belgian, who tied for seventh at Sedgefield, is in Scotland this week to play the European Tour’s Johnnie Walker Championship, the final event to earn qualifying points for the Ryder Cup team.

Colsaerts, a winner earlier this year at the Volvo World Match Play, is currently in 12th place – 12.47 points behind No. 10 Martin Kaymer, who is not in the field this week at Gleneagles. Ian Poulter, currently 11th in points, is playing in The Barclays and is therefore unable to improve his standing on the points list. Nonetheless, the Englishman seems likely to receive one of two captain’s picks from Jose Maria Olazabal.

To bump Kaymer out of the top 10 (and secure one of the automatic spots), Colsaerts needs either a win or no worse than a three-way for second at Gleneagles, site of the 2014 Ryder Cup.

“You’ve got to show you can make it,” Colsaerts said in Greensboro. “You’ve got to go back home and play and make sure it counts for everything.”