Feherty rooting for Americans at Medinah 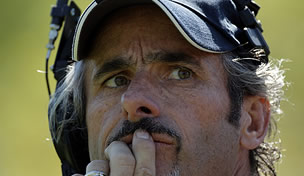 Getty Images
DUBAI, UNITED ARAB EMIRATES - FEBRUARY 12: Thomas Aiken of South Africa during the third round of the Omega Dubai Desert Classic on the Majlis course at the Emirates Golf Club on February 12, 2011 in Dubai, United Arab Emirates. (Photo by Ross Kinnaird/Getty Images)  -

Who says flip-flopping is only reserved for politicians this time of year?

David Feherty hails from Northern Ireland and played for Team Europe during the famed 'War by the Shore' Ryder Cup in 1991. He still counts former European Ryder Cup captain Sam Torrance among his closest friends. However, the analyst has lived in the Dallas area for nearly 20 years and became a U.S. citizen in 2010. With allegiances to both sides, who will Feherty be supporting this week at the Ryder Cup?

During Monday's taping of a Ryder Cup-themed Feherty Live, the host confirmed that he would be pulling for the American squad this week at Medinah. The one-hour special, which includes guest appearances from swimmer Michael Phelps and basketball superstar Michael Jordan, airs Wednesday at 9 p.m. ET on Golf Channel. The show will also feature an appearance from Feherty's good friend Torrance, as well as former U.S. Ryder Cup captains Paul Azinger and Lanny Wadkins.

A long-time supporter of U.S. troops and causes benefiting those in combat, Feherty created the Troops First Foundation in 2008 to help raise money for wounded soldiers.