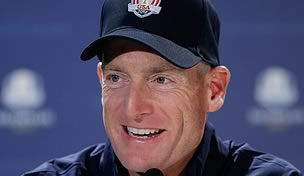 Getty Images
PONTE VEDRA BEACH, FL - MAY 08: Sergio Garcia of Spain plays into the 18th green during the second round of THE PLAYERS Championship on THE PLAYERS Stadium Course at TPC Sawgrass on May 8, 2009 in Ponte Vedra Beach, Florida. (Photo by Richard Heathcote/Getty Images)  -

A stalwart on every U.S. Ryder Cup team since 1997, Jim Furyk knows well the ups and downs that these matches can provide. He has no plans to overstate his role, though, as a seven-time Ryder Cup veteran on an American squad with four rookies.

'I'm not going to tell them how to play golf,' Furyk said during Tuesday's news conference. 'They all had a better year than me, and I had a good year.'

Along with Tiger Woods and Phil Mickelson, Furyk has been a mainstay on the U.S. team for 15 years. Despite being among the top-ranked players in the world and amassing a combined 18 majors since Valderrama, the trio has only seen the American side lift the cup twice in that span. 'As a team, we haven't played that well collectively for seven Ryder Cups,' Furyk explained Tuesday. 'If we all had a 75-percent winning percentage, we'd be 5-2 instead of 2-5.'

Individually, Furyk has experienced both the highest high and lowest low during singles play. In 2002, his match with Paul McGinley was halved, giving the Europeans the Ryder Cup; in 2008, his point against Miguel Angel Jimenez on Sunday clinched the cup for the Americans. 'It's kind of an empty feeling,' Furyk said of his loss to McGinley 10 years ago. 'Seeing the place erupt and being on the green, you feel responsible,' he said.

Furyk was also asked Tuesday about Woods' career Ryder Cup record, an underwhelming 13-14-2 entering this week. 'With as dominant as he was through most of those years, I think anyone would be a little surprised to see a .500 (record),' he noted. 'But ... no one has an extremely good record on our team, and that would be because we haven't won a lot of these matches.'

Furyk was quick to note Tiger's strong record in singles play, and when Woods' singles record (4-1-1) was confirmed during Tuesday's news conference, Furyk did not hesitate to shift the blame. '4-1-1? Yeah, that's probably the rest of our fault then,' he quipped. 'That's my theory.'