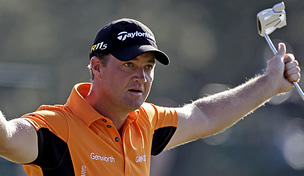 Getty Images
TURNBERRY, SCOTLAND - JULY 16: Kenichi Kuboya of Japan plays a shot during round one of the 138th Open Championship on the Ailsa Course, Turnberry Golf Club on July 16, 2009 in Turnberry, Scotland. (Photo by Warren Little/Getty Images)  -

Less than a week removed from helping Europe to retain the Ryder Cup, Peter Hanson expressed anger and disappointment over his lack of playing time at Medinah.

The Swede played in only one match before Sunday's singles, losing, 5 and 4, Friday afternoon to Bubba Watson and Webb Simpson while paired with Paul Lawrie. Hanson expected another playing opportunity Saturday, but was left on the bench by captain Jose Maria Olazabal.

'I might not send him many Christmas cards,' Hanson spoke of the Spaniard.

According to reports, Hanson did not discover that he was out of the Saturday fourball lineup until 20 minutes before the session began.

'That's probably why I got so upset,' said Hanson, who at that point had already played practice holes and marked the Saturday afternoon pin positions in his notes. 'I was already in game mode. I just wanted to get out there and win some points.'

Having won the KLM Open only a few weeks before Medinah, Hanson entered Ryder Cup week expecting to contribute for the European side. Instead, he left Chicago without notching a point, falling in his singles match, 2 up, to Jason Dufner, one of only three Euros to lose their match during Sunday's improbable comeback.

'The Ryder Cup kind of hurt my confidence a bit, especially the first couple days,' explained Hanson. 'When I didn't get to play more than 14 holes in the first two days, that really got to me and I was very disappointed on Saturday.'

'Peter had a great season this year leading into the Ryder Cup, so you can understand his frustration because he loves to compete,' said Gilchrist. 'He wanted to be out there with his teammates.'