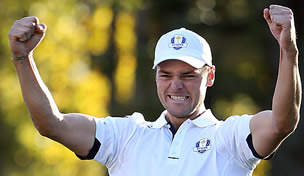 With the outcome of the Ryder Cup largely riding on his 6-foot putt, Martin Kaymer found himself in a position Sunday that few golfers would envy. In that moment, though, the German sensed an opportunity.

'Of course it was a lot of pressure, but I see it more like a gift what happened,' Kaymer told reporters as he prepared for this week's Alfred Dunhill Links Championship. 'It's very, very rare that you are in a position as a golf player to make such an important putt.'

Three days after the celebrations ended in Chicago, Kaymer is set to begin play again this week in Scotland. The gravity of the final stroke of his singles match with Steve Stricker, though, remains evident.

'There will never, ever, be a more important putt in my life,' Kaymer explained. 'Even if I have a chance in two years' time again, I've done it before already.'

Unlike fellow German Bernhard Langer 21 years earlier, Kaymer's Cup-clinching putt found the bottom of the hole, igniting the European celebration at Medinah. The 2010 PGA champion is aware, though, of how close he came to handing the trophy back over to the Americans.

'It was such a fine line between being the hero and the biggest idiot,' he explained, 'and fortunately it went the right way.'

Now a member of two winning Ryder Cup teams, Kaymer appreciates the significance of the rally that was needed for the Europeans to reclaim the trophy.

'We were such a team on Sunday,' he stated. 'To be part of such an historical day is very, very special.'