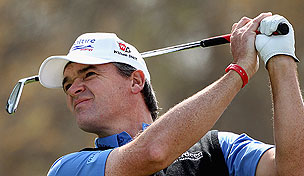 When the Ryder Cup heads to Paul Lawrie's homeland in 2014, he hopes to play a role – from inside the ropes.

Among a short list of names being mentioned as potential European Ryder Cup captains in the near future, Lawrie plans on playing when the 2014 matches are held at Gleneagles in Scotland.

'First and foremost I want to play on the team,' Lawrie told the BBC.

The oldest playing member of this year's European squad, Lawrie will be 45 when the next Ryder Cup rolls around.

'You don't know what's going to happen down the line but right now I feel very competitive at 43,' explained the 1999 Open champion, who has won twice this year on the European Tour. 'I can't imagine being any less so in two years' time.'

A two-time Ryder Cup participant, Lawrie last made the team in 1999 and has now been on either side of the two most improbable comebacks in the event's history. His 5-and-3 singles win over Brandt Snedeker on Sunday helped key the rally that ultimately led to the Europeans retaining the Cup.

Although his plan is to participate at Gleneagles as a player, Lawrie did not rule out a future captaincy.

'In the future I'd definitely like to do it,' said Lawrie. 'But I think just now I'm getting better as I get older as a player, so 2014 is just too soon for me.'