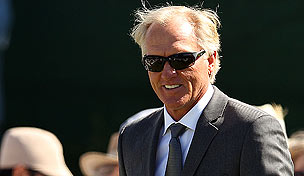 A few days after stating that Tiger Woods is 'intimidated' by Rory McIlroy, Greg Norman took to Facebook to defend and clarify the comments he made in an interview earlier this week.

'I stand by my comments,' Norman wrote on his Facebook page Saturday. 'When you look at my comments in the full context of the article, you will see that it provides a more balanced view of my sentiments on this topic.'

In an interview this week with FoxSports.com, Norman indicated that McIlroy may have the upper hand in his budding rivalry with Woods. 'What I'm seeing is that Tiger is really intimidated by Rory,' Norman said. 'When have you ever seen him intimidated by another player? Never.'

Norman attempted to clarify his position on Woods with his follow-up comments Saturday. 'Tiger is a great athlete and a great student of the game and he will continue to win,' wrote the two-time major champion. 'But we are seeing a transition away from his dominance. Rivalry and parity is great for the game of golf.'

Friday morning, former NBA MVP Charles Barkley made headlines by claiming that Woods should 'go ballistic' on Norman over the Aussie's comments; The Shark seemed to notice. 'No Charles, I was not referencing or comparing Tiger's record to mine,' Norman wrote as part of his statement.