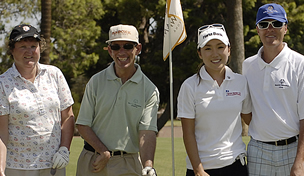 Golfers will participate in one of five skill levels, with formats ranging from an individual skills competition to team play to 18-hole, individual stroke play each day.

Participants were joined Thursday by I.K. Kim (pictured, third from left), three-time LPGA winner and Special Olympics Global Ambassador for golf. Kim conducted a skills clinic after joining a group of Special Olympics athletes for a practice round Thursday morning.

'Special Olympics opened my eyes to the possibilities of these athletes,' Kim said.

She was also among a group of nearly 500 Special Olympics athletes, coaches, volunteers and officials who participated in the event's opening ceremonies on Thursday. Similar to the Olympics, the 203 golfers marched in by delegation and the Special Olympics cauldron was lit, which will be extinguished after play concludes on Sunday.