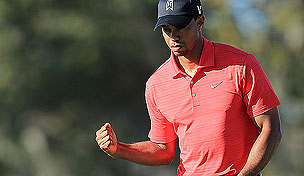 Tiger Woods officially announced his schedule for the balance of the 2012 season, one that will see the 14-time major champion accrue his fair share of frequent flyer miles.

Woods' break following the Ryder Cup will be a short one, as he plays next week in the Turkish Air Lines World Golf Final, held Oct. 9-12 on the PGA Sultan Course at the Antalya Golf Club in Belek, Antalya. Featuring both stroke- and match-play formats, the event's eight-man field will see Woods joined by fellow major champions Rory McIlroy, Charl Schwartzel and Webb Simpson, as well as Lee Westwood, Hunter Mahan, Justin Rose and Matt Kuchar.

Woods will next play in the U.S. when he hosts the Tiger Woods Invitational, Oct. 16-18, in Pebble Beach, Calif. Benefiting the Tiger Woods Foundation, the private event will include golf at three of California's top courses - Spyglass Hill Golf Course, Monterey Peninsula Country Club and Pebble Beach Golf Links.

Woods' next event takes him to Malaysia for the CIMB Classic, Oct. 25-28. Held at the Mines Resort and Golf Club in Kuala Lumpur, the tournament features a 48-man field including Jason Dufner, Rickie Fowler and defending champion Bo Van Pelt.

His 2012 season will conclude with the World Challenge, Nov. 28-Dec. 2. Contested across Sherwood Country Club in Thousand Oaks, Calif., Woods returns to the 18-man tournament as its defending champion as well as tournament host, having won five times in the 13-year history of the event.