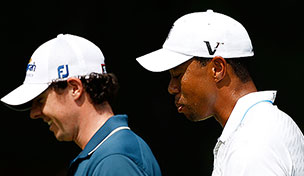 Tiger Woods and Justin Rose both fired 4-under 66 to share the lead after the opening round of the Tour Championship outside Atlanta.

Playing with World No. 1 Rory McIlroy for the fifth time during the FedEx Cup playoffs, Woods carded six birdies on his round Thursday, needing only 26 putts around East Lake. Rose started slowly but was 5 under across his final 11 holes Thursday, including a 52-foot birdie putt on No. 18 to complete his round.

Overall scores remain bunched after the opening round, with 18 of 30 players in the field breaking par on Thursday. The group of players one stroke behind Woods and Rose includes reigning Players champion Matt Kuchar, and Scott Piercy, who was the 30th and final person to gain entry into this week's field.