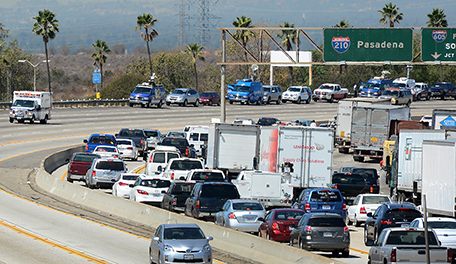 We guess this guy is either a Ducks fan or a Seminoles fan - meaning this was either a joyful, drunken golf cart ride or a sad one.

Either way, it's illegal.

Per NBC Los Angeles, "California Highway Patrol officers chased down a man who was driving down a freeway in a golf cart in Pasadena Thursday.

"The suspect, who was arrested on a DUI charge,  was spotted in a 9-seat cart in the slow lane of the eastbound 210 at North Lake Avenue at around 10:10 p.m, the CHP said."

Pasadena is, of course, the site of the Rose Bowl, where the No. 2 Oregon Ducks routed the No. 3 Florida State Seminoles on Thursday to advance to college football's national championship.

"It is not known where the suspect entered the freeway, or where he obtained the cart. An investigation is ongoing," the report said.

They'll ask when he sobers up. End of investigation.

Speaking of golf cart incidents, I wonder if they ever let that 7-year-old off the hook in Texas?