DORAL, Fla. – Selection Sunday at Doral Resort and Spa came down to only two choices, with Ernie Els taking low South African honors and Charl Schwartzel claiming the B Flight at the U.N. Open. Thanks for playing.

Not that it was easy. Never is for the big man despite one of the game’s coolest nicknames and syrupy swings. But this is a new Big Easy. Comfortable in his own skin and a reformed homebody after a lifetime of globetrotting. Confident in a short game that had been AWOL for too long and fixed on a singular purpose – winning.

“One of the things if you work as hard as he does you feel like you’re due and he has been due for a while,” said Els’ manager Chubby Chandler. “He’s strong and he really has the passion.”

For four wind-whipped days in south Florida Els was also as good as he’s been in some time, particularly on Sunday with Schwartzel nipping at him and a three-club wind changing directions like Camilo Villegas changes designer outfits.

Ernie Els won for the 17th time on the PGA Tour. (Getty Images)
Els traded blows with Schwartzel, who he began the final turn tied for the lead after crashing at his idol’s house and picking his brain on the Bear’s Club practice tee the previous week.

And for 10 holes on Sunday the South African showdown was a standoff, with Els playing flawless golf and Schwartzel charging like someone who has spent a lifetime chasing major

championships. But as Doral’s winds continued to turn the affair took on a parable feel, with something to be said for the slow and steady.

“This took so much work to win,” said Els, who closed with a 66 for an 18-under 270 total and his first Tour title since the 2008 Honda Classic. “A lot of people have said that the older you get the tougher it becomes to win and that’s very true.”

Still, the 25-year-old Schwartzel left many wondering which South African would be a better bet to claim Grand Slam glory this year. Through 64 holes the two remained knotted at 16 under after the young man whose father once teamed with Els in a professional event birdied four of five holes around the turn.

The difference, however, is the one thing that has been missing from Els’ game for some time, a defiant short game that in Round 4 defied belief and deftly handled everything the Blue Monster could throw at that 6-foot-4 frame.

Although much was made of Butch Harmon’s hit-and-run lesson with Els earlier in the week at Doral, Chandler said his man’s resurgence was due in large part to an improved short game which is the byproduct of a softer Callaway golf ball and new 35-inch putter.

“I haven’t been making those kind of putts and you have to make putts like that to win golf tournaments at some point in a tournament,” said Els, who tied for first in total putts and putts made distance.

Specifically, Els scrambled like Dan Marino in his prime, with clutch par saves at Nos. 11, 13 and 14 where he missed the fairway, the green and holed a 20 footer for par to keep his advantage. Schwartzel didn’t.

A bogey at the 11th dropped Schwartzel one back and the tournament turned on the rarest of golf happenings, a sculled bunker shot from a fried-egg lie at the 15th for bogey. The young charge never recovered.

By the time the two reached the 18th hole on Sunday favorable winds and a four-shot cushion for Els made the feared closer something of a mini-Monster.

“He played flawless golf today,” said Schwartzel, who finished four shots back after signing for a final-round 70 for his second consecutive top 10 in a World Golf Championship. “Whenever anyone makes six birdies and no bogeys on a windy day like this you’re almost bound to win.”

It was also the second consecutive WGC overshadowed by Tiger Woods, although in the world No. 1’s defense the distraction had nothing to do with any orchestrated “press event” and everything to do with a return that seems imminent if not a tad cloudy.

Whether Woods rejoins the fold at the Tavistock Cup, Arnold Palmer Invitational or the Masters remains to be seen. What is certain is that players are tired of talking about it.

“We just want to move on,” Graeme McDowell said. “We just want him back and for things to be like they were.”

Fortunately for CA and the Tour a pair of South African bookends livened up the proceedings, to say nothing of Phil Mickelson’s game which appears to be firing at three-quarter time at the moment.

CA’s deal with the Tour expired on Sunday and rumors persists they plan to take their checkbook and go home, although Tour commissioner Tim Finchem did not seem overly concerned when asked about Doral’s future.

We could play other places but we like playing here. It works for our TV packages and works for the Florida Swing,” Finchem said. “My feeling is it will stay here . . . as a World Golf Championship.”

As for Lefty, he limped to an 8-under finish and a tie for 14th on a game that’s not far off but far from ready for the prime time of Augusta National. It’s why Lefty added Bay Hill to his schedule and why he was headed home late Sunday in need of a Dave Stockton Sr. short-game refresher.

“I need to get in contention the next two weeks,” said Mickelson, who employed a familiar game plan at Doral, two drivers, with similar results to the last time he tried the experiment, too many missed fairways. “It’s not as bad as it feels but not quite where it needs to be.”

Neither Els nor Schwartzel, who plans to stay at the Big Easy’s south Florida abode again next week, had any such worries.

“Charl is the star of the future – but he’s got to beat me,” Els said on the eve of their duel. “I fed him well, I gave him good wine. He owes me. Big time.”

Now Els faces his ultimate nemesis, Augusta National and the Masters, where he has finished second, fifth, sixth . . . everywhere but first. In many ways Doral was Els’ Selection Sunday, and the Masters in four weeks will be his personal Big Dance. 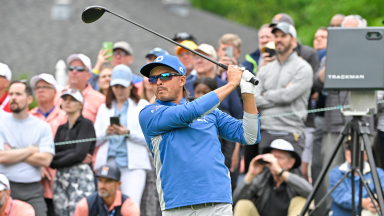 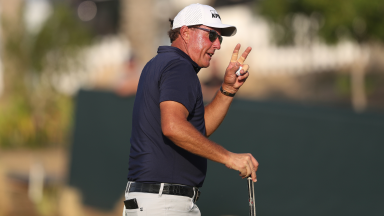 Revelations that Mickelson lost $40 million were published Thursday as part of a sneak peek of Alan Shipnuck’s upcoming biography.

Fate of the Tour's fall slate the next big topic

For most players who won’t be wooed by LIV's riches, what happens to the Tour's fall slate is a more important conversation.