2013 Masters will be one for the record books 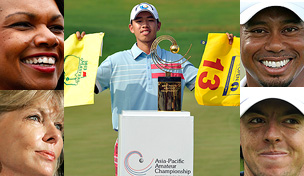 Getty Images
PONTE VEDRA BEACH, FL - MAY 08: Martin Kaymer of Germany looks on from the 14th hole during the second round of THE PLAYERS Championship on THE PLAYERS Stadium Course at TPC Sawgrass on May 8, 2009 in Ponte Vedra Beach, Florida. (Photo by Richard Heathcote/Getty Images)  -

The 2013 Masters figures to be an epic one, no matter the player who eventually slips into the green jacket.

Decked out head-to-toe in Nike, Rory McIlroy and Tiger Woods will begin their pursuit of the year’s first major; Augusta National’s first two female members, in green jackets of their own, will soak up the atmosphere near the first tee; and a 14-year-old from China named Tianlang Guan will become the youngest competitor ever at The Masters.

Ponder that for a moment.

And a 14-year-old bunking in the Crow’s Nest, without a parental permission slip.

Three months ago, could you have imagined those three scenarios?

Accepting female members for the first time in the club’s 80-year history was momentous enough. It was trumpeted by Augusta National chairman Billy Payne as a “joyous occasion,” and rightfully so. It was celebrated in print, as the famed old club had “finally entered the 21st century,” some columnists opined.

But it would surprise little if Guan’s game-changing victory at the Asia-Pacific Amateur someday proved even more historic.

On Sunday at Amata Spring Country Club in Chonburi, Thailand, Guan earned his spot in the Masters field by edging Cheng-Tsung Pan – a sophomore at Washington and one of the world’s top 15 amateurs – by a stroke. On the final green, Guan sank a 5-foot par putt to seal the victory. In another sign of the times, the clinching putt was holed with a belly putter.

Already tabbed as China’s next golfing prodigy, Guan continues to glide down the path blazed by other Asian stars Ryo Ishikawa (a Japan Tour winner at age 15) and Seung-yul Noh (a European Tour winner at 18). It would be unfair to saddle Guan with such high expectations, of course. (After all, he still weighs only 125 pounds.) But thus far, there remains little doubt that the teen has excelled in his advanced-level coursework.

Last year, at the prestigious Junior World Championship, he won his age division (11-12) by 11 shots. (Playing with the big boys this summer – well, the boys ages 15-17, the first time in the event’s 45-year history that someone 13 years old was allowed to play in the oldest division – he finished T-22.) He captured the China Amateur Open, and this past April he became the youngest player ever to compete in a European Tour event. Just 13 at the time, he shot rounds of 77-79 at the China Open and was 14 shots adrift of the cut line.

Of course, that background will be rendered a mere footnote to the larger story, to Guan’s ascension to the biggest stage in golf. A Masters berth has been awarded to the winner of the Asia-Pacific Amateur since the tournament’s inception in 2009, and Guan’s appearance in April is a dream scenario for Augusta National. The Masters is already beamed to more than 200 countries, and Guan is from Guangzhou, China, the third-largest city in the country, with a population of more than 9.5 million. Augusta National’s reach just grew longer still.

“I don’t know what’s going to happen there,” Guan said Sunday, “but I know I just want to do well.”

Putting his achievement in the proper historical perspective, consider what a few of the game’s greats accomplished at age 14:

In 1916, Bobby Jones captured the Georgia Amateur and reached the quarterfinals of the U.S. Amateur.

In 1954, Jack Nicklaus won the Ohio Junior but also was bounced in the first round of the U.S. Junior Amateur.

In 1990, Woods advanced to the semis of the U.S. Junior and became the youngest to win the Insurance Youth Golf Classic.

In 2003, McIlroy became the youngest champion of the Ulster Boys Championship.

A mind-boggling thought, but in 2003, Tianlang Guan was 5 years old. He had begun playing the game a year earlier, alongside his father, Hanwen.

In the next few years, Guan and his family would fly to Shanghai just to watch Woods play in the HSBC Champions, and at age 9 he would break par from the back tees for the first time, and then three years later he would see Woods again, at the 2011 Mission Hills Junior Championship.

Only this time, Woods was handing the winner’s trophy to Guan.

They are sure to cross paths again at Augusta – a 37-year-old legend vying for his 15th major, a 14-year-old amateur with seemingly limitless potential, the same competition and perfectly manicured layout ahead … and two keen observers in Rice and Moore.

Three months ago, could you have imagined that?