LAS VEGAS -- Lorena Ochoa posted a 6-under 66 on Saturday to polish off a wire-to-wire victory at the LPGA Takefuji Classic. She finished at 19-under-par 197 and missed the tournament record by a stroke at Las Vegas Country Club.

The win was Ochoa's fourth on the LPGA Tour and her first of the season. She finished second here last year, when she established the course record of 63 in the second round. She matched that in this year's first round.

Lorena Ochoa wrapped up her first victory of the season, going wire-to-wire in Las Vegas.
Seon Hwa Lee also carded a 6-under 66 on Saturday and finished alone in second place at minus-16. Brittany Lincicome shot a 3-under 69 and took third at 14-under-par 202.

Juli Inkster tied the course record of 63 in the final round to come in fourth at minus-13. Mi Hyun Kim fashioned a round of 5-under 67 and finished in fifth place at 12-under-par 204.

Ochoa began the final round of this 54-hole event with a two-shot lead over Lincicome, but quickly extended the margin to three thanks to an 18-foot birdie putt at the first.

Inkster was torching the course and closed the gap to two with a birdie at 11, but Ochoa had an answer. She rolled in a 5-foot birdie putt at the fifth, then drained a 9-footer for birdie at six and found her cushion to be four shots.

Inkster momentarily dropped down the leaderboard with bogeys at 13 and 15, but Lincicome inched closer to Ochoa due to a birdie at nine. Unfortunately, Ochoa reached the green at the same hole and two-putted for birdie from 45 feet.

Ochoa once again took advantage of the par-5s and two-putted for another birdie at the 10th. That sent her to 18-under par and gave her a five-stroke lead, but Lincicome cut it to four with a birdie at 11.

That would be the closest any competitor got to Ochoa until late in the round. Lee birdied 16, 17 and 18 to get into the clubhouse at minus-16, two shots behind Ochoa.

At the par-5 closing hole, Ochoa knocked her second on to the back fringe. She chipped to 5 feet, then converted the birdie putt to exorcise some demons.

Two weeks ago at the Kraft Nabisco Championship, Ochoa fell apart on the front nine on Sunday. She rolled in a 10-foot eagle putt to match Karrie Webb atop the leaderboard and force a playoff in pursuit of her first major championship.

On Saturday, Ochoa left no one with a chance for sudden death.

Paula Creamer, the No. 3 player in the world, never mustered a challenge on Saturday. She shot a 1-under 71 and tied for sixth place with Ai Miyazato, who posted a 6-under 66, at minus-11. 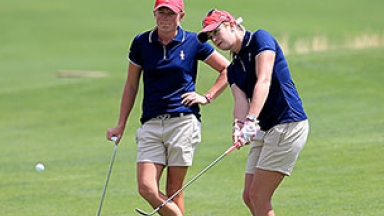 Solheim Cup stars teeing it up this week in Canada

Twenty three of the 24 players from last week's Solheim Cup will tee it up this week in Canada.

By GEORGE WHITE
4/18/06 -- It was one of those weekends where it was good to be young but not to be inexperienced.

4/14/06 -- Lorena Ochoa shot a 4-under 68 in windy conditions Friday to take a two-stroke lead over Brittany Lincicome in the Takefuji Classic.