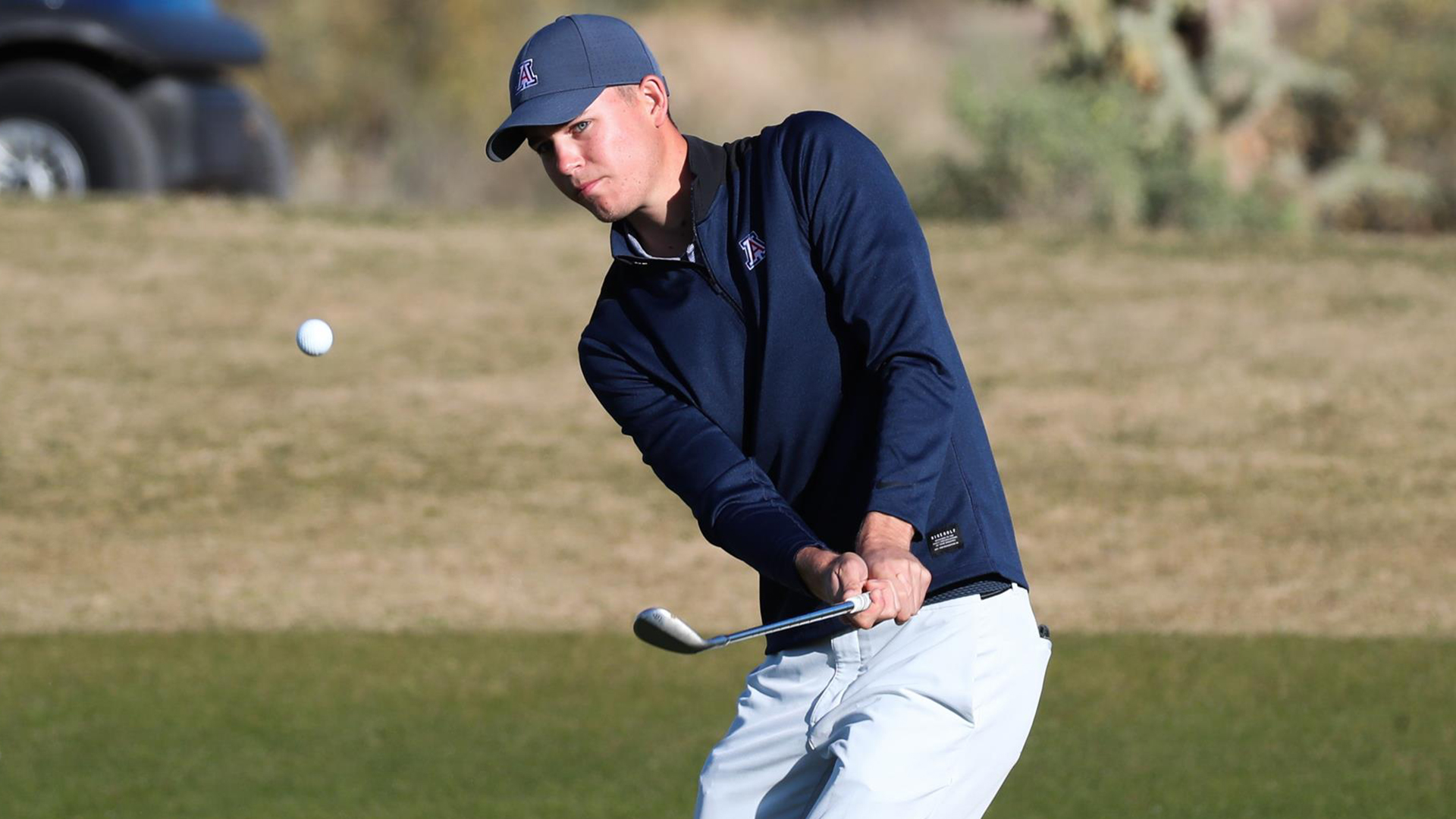 It’s of little surprise that the No. 1 men’s team in the country is located in Arizona.

The real revelation, though, is that the nation’s top-ranked squad doesn’t reside in Tempe.

Arizona State was tabbed by many as the NCAA title favorites, partly because it will host the NCAA Championship this spring at Grayhawk but also because of its deep and talented roster led by Kevin Yu and David Puig. But the Sun Devils are No. 3 in the latest Golfstat rankings, two spots below their rivals to the south, the Arizona Wildcats.

Right now, the national championship projects to run through Tucson after Arizona won its first two stroke-play events of the season. The Wildcats bested Wake Forest to win their home tournament and last Wednesday rallied to share the team title with North Carolina at The Prestige, where they finished a shot better than Pepperdine and six clear of Arizona State, which only clipped Arizona by a point in a two-day match-play event to kick off the season.

So, college golf world, it’s finally time to show some respect to the Wildcats.

“We always play with the right chip on our shoulder,” Arizona head coach Jim Anderson said. “Not that we feel truly disrespected, because I don’t feel that way, but I also don’t think that people think of us as a favorite, or at least they haven’t. … I thought we were this team last year, too, and now that we get to add a year of experience and even more desire and hunger because of what was taken away, that’s part of our makeup now. I don’t know if we’re going to go eight for eight and win everything, but we’re totally prepared for this opportunity this spring and are prepared to have success one step at a time.”

Arizona’s ascension can be credited to many factors. Brad Reeves, David Laskin and Briggs Duce all decided to return for fifth seasons, and Reeves started his extra season by winning the Arizona Intercollegiate for his first college title. Christian Banke also decided on a fifth year, though this season is his first in Tucson after transferring from San Diego State. And then there’s senior Trevor Werbylo, who won the individual title at The Prestige.

Werbylo is coming off a shortened junior campaign in which he tallied three runner-up finishes and earned third-team All-America honors. It was another high watermark for the Tucson native, who has progressively gotten better each year. Werbylo played mostly local events as a junior golfer and wasn’t heavily recruited, though he moved to the top of Anderson’s list after firing a 63 in a qualifier at Tucson National as a high-school sophomore. He picked up the game thanks to his older brother, Kyle, and … Tiger Woods.

Despite never having a swing coach, Werbylo instead evolved into one of college golf’s best players – he’s now sixth in the PGA Tour University rankings, which were updated Wednesday – by perfecting his swing solely by watching YouTube videos of Woods.

“I definitely would not be playing golf if it wasn’t for him. Period,” Werbylo said. “I’d probably be playing baseball. I’ve watched, beginning in 2007, every golf tournament that he’s played in, and then I’ve re-watched probably every tournament prior to that. Even though I’ve never met him, he’s definitely one of the biggest influencers on my life.”

So, as one could imagine, Werbylo was devastated to hear the news that Woods was seriously injured in a car accident on Tuesday in Los Angeles. He and his teammates were practicing at Tucson Country Club on Tuesday when Werbylo got a text from his girlfriend.

“I’m just glad that it’s not life-threatening,” Werbylo said. “It’s still really tough. Certainly, in my mind – and I think a lot of peoples’ minds – he’s the greatest ever to play the game. Hopefully, he can pull off a Ben Hogan recovery and be able to compete again.”

Coincidentally, Werbylo ran into Woods’ old caddie, Mike “Fluff” Cowan, at Tucson Country Club on Tuesday. They chatted about the Woods’ news while Werbylo also picked Cowan’s brain for memories of the 1997 Masters, where Cowan was on Woods’ bag.

Werbylo surely already knew some of the stories. After all, he’s watched that tournament dozens of times on YouTube. 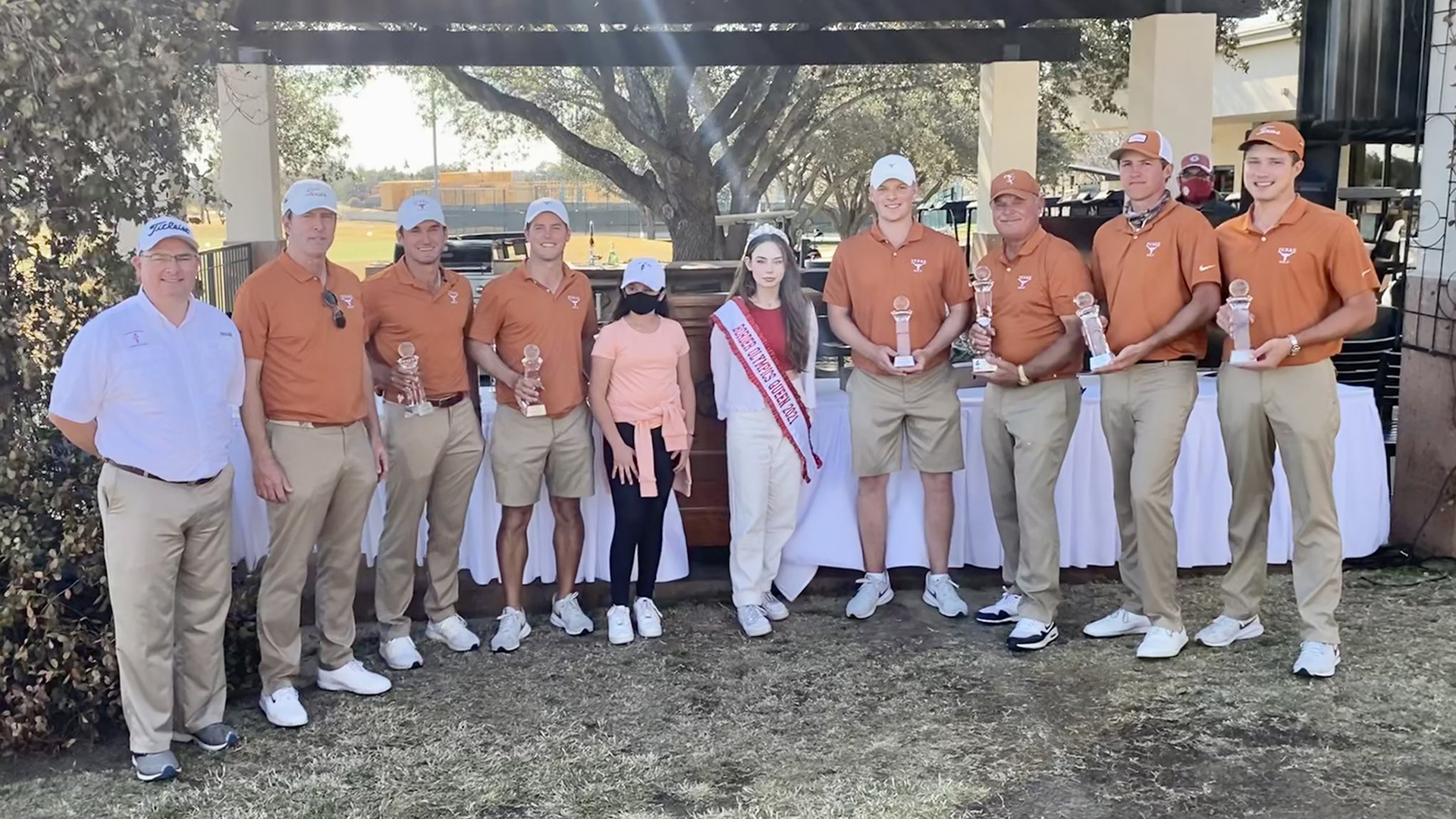 If depth is a luxury in college golf, then the Texas men and USC women are living large.

They proved it Tuesday, though under different circumstances. The Longhorns opted to rest three of their top players and give their other guys some experience against a weak field. The Trojans were forced to compete without three of their players because of COVID-19 protocols.

When Texas head coach John Fields added the Border Olympics to his schedule this spring, he saw it as an opportunity to see what he had further down the lineup. It also meant giving stars Cole Hammer, Pierceson Coody and Travis Vick some much needed rest (Hammer and Coody will likely play a Walker Cup in May between conference and regional tournaments).

“COVID demands creativity and that was the idea,” Fields said.

The rest of the Longhorns responded. Though Texas didn’t win Tuesday in Laredo, Texas, finishing second and eight shots back of winner Texas A&M, it did get strong performances from a few players. Notre Dame transfer Hunter Ostrom shot 4 under and lost in a playoff to Texas A&M’s Dan Erickson. Fellow senior Chris Bring finished a shot behind. And sophomore Mason Nome tied for fifth.

Ostrom and Bring will now join Hammer, Coody and Vick in the lineup for next week’s Cabo Collegiate at TPC San Antonio. Texas is now ranked 10th in the nation, according to Golfstat.

While the competition wasn’t particularly stout, but his team winning in the face of adversity certainly pleased USC head coach Justin Silverstein.

“This week was quite strange and had a weird feeling to it,” Silverstein said. “Being down a coach and a few starters presented a different challenge for us. I can't thank our department enough for helping us get cleared to play this week and for setting safety protocols that allowed us to continue to compete. This group of five did an amazing job focusing on the task at hand and taking care of business. Allisen's numbers speak for themselves. Her future is so bright; I cannot wait to see what's next. Alyaa got off to a rocky start at this event and then played as well as anyone. Her consistency throughout her game is so advanced. Malia was great in her return to the lineup and her solid play is going to be a huge part of our success going forward.” 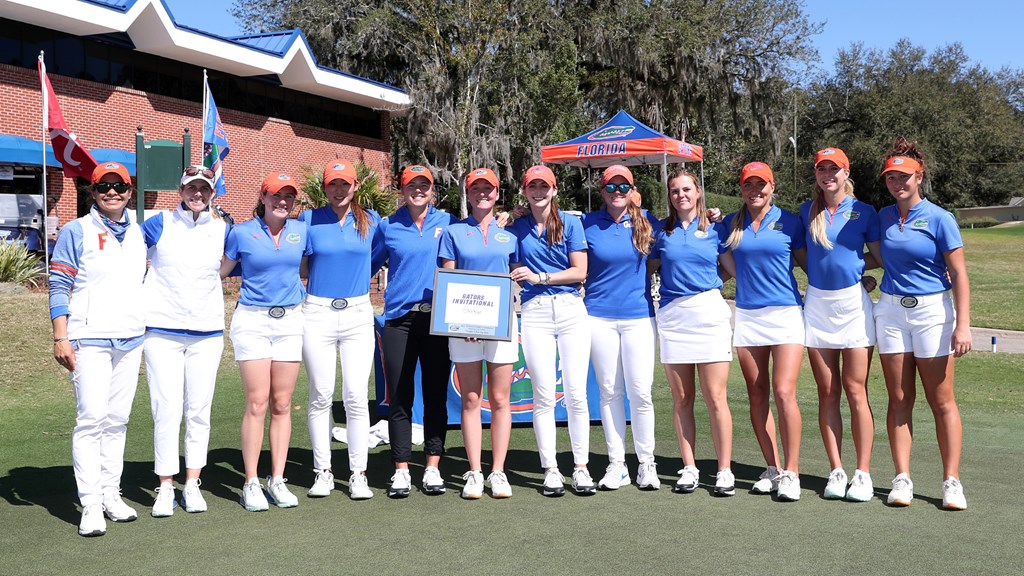 No drop score, no problem

With senior Addie Baggarly unable to play Tuesday’s final round of the Gator Invitational, it meant that host Florida wouldn’t be afforded a drop score as it attempted to rally from fifth place after 36 holes.

The short-handed Gators rose to the occasion, shooting 2 under on the final day to share the team title with Ole Miss. Sophomore Annabell Fuller led the charge, going bogey-free and firing a 4-under 66 to edge three players by a shot for the individual title.

“It was a fantastic finish and I'm really proud of the team,” Gators head coach Emily Glaser said. “They were poised and determined today. It was one of the more special moments I can remember in my time at Florida.” 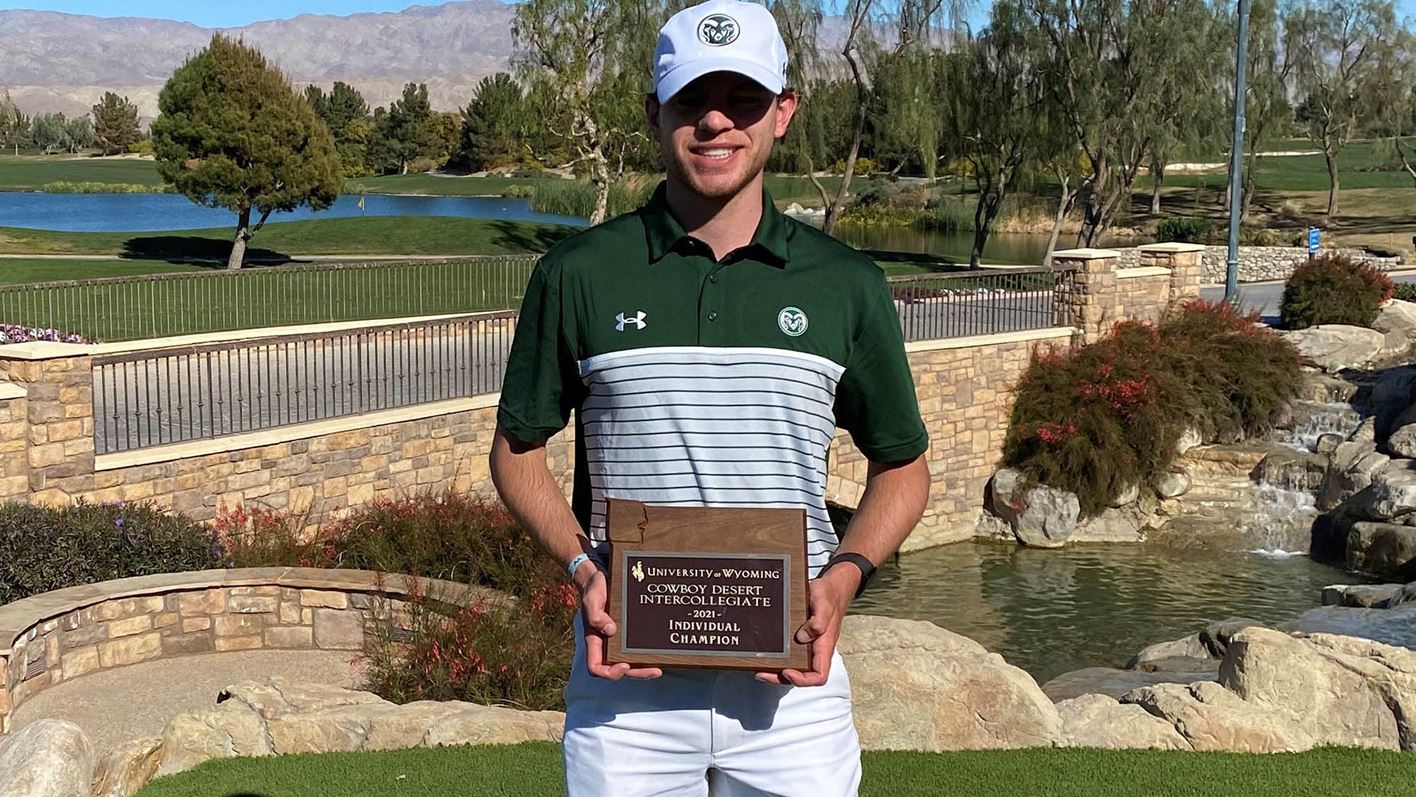 Entering the spring, Colorado State senior A.J. Ott had never won a college tournament. Now, in the span of five days, he has two victories.

Ott shot 12 under before topping Pepperdine’s Derek Hitchner in a playoff last Wednesday at The Prestige Individual Tournament. Colorado State, which sent six individuals to the tournament after not getting into the field for the team event, then stayed in La Quinta, California, to compete in the Wyoming Desert Intercollegiate, which Ott also won, this time by two shots at 11 under.

“What a great week for A.J. with back-to-back wins,” Rams head coach Christian Newton said. “I couldn't be happier for him. He deserves every bit of the success he is having as he works so hard on a daily basis. It's awesome to see it paid off.”

Baylor, the top-ranked women’s team by Golfstat, remained undefeated on Tuesday at the ICON Invitational in Humble, Texas. Tied with No. 4 LSU for the lead entering the final round at Golf Club of Houston, the Bears posted the round of the tournament, a 12-under 276, to beat the Tigers by five shots and win their fifth straight event to begin the season.

No team in the Big 12 Conference’s 25-year history has accomplished that feat.

Baylor also bested its top conference competition yet again, finishing 14 shots better than Oklahoma State and 34 shots clear of Texas, which again was without its best player, Kaitlyn Papp.

Baylor senior Cooper Dossey wasn’t part of the Bears’ lineup for their disappointing seventh-place finish at the Border Olympics. But Dossey had other plans.

Back in Waco, Dossey attended Baylor’s men’s basketball game, where the No. 2 Bears hosted Iowa State. Dossey’s girlfriend is a cheerleader, and during the game the 22-year-old decided to propose.

She said yes, too.

“The hardest surprise I’ve ever had to keep,” Dossey wrote in Instagram. “Ashley, I love you and I can’t wait to spend the rest of my life with you. Meet my fiancée!!” 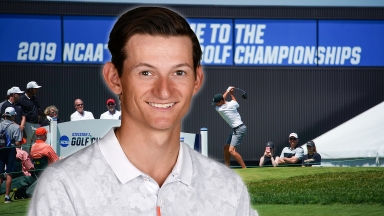 In this week's college golf notebook, we highlight the strong recent play by now-healthy Garett Reband of Oklahoma, plus updated our predictions at the midpoint of the spring. 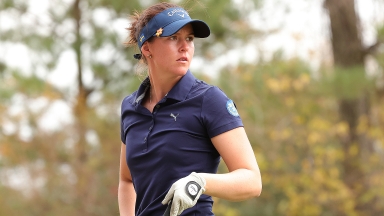 This week's college golf notebook highlights the still-undefeated Linn Grant of Arizona State, plus looks at wins by Texas and Wake's Alex Fitzpatrick. 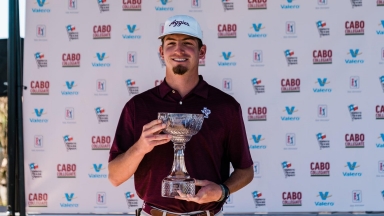