Could a 4-handicap male win on the LPGA? Twitter user re-ignites 'Battle of the Sexes'

Is this the ghost of Bobby Riggs? Or somebody just channeling Riggs from beyond?

Whoever he is, JPJ is rekindling memories of sport’s great “Battle of the Sexes” match in the ‘70s.

In response to this reporter’s tweet about how the PGA Tour is giving its players up to $75,000 in COVID-19 sick pay while the LPGA will only be providing $5,000 to members and caddies who get sick at tournaments, JPJ fired a shot heard around the women’s game.

He ignited outrage with a tweet responding to the PGA Tour/LPGA thread’s growing conversation about the financial disparities between the men’s and women’s games.

“People like watching men because they are entertained by watching something none of us could do our own,” JPJ tweeted. “There are thousands of men who could win weekly on the LPGA tour. Anyone with a 4 handicap would likely shoot mid 60s from forward tees.”

Attempts to reach JPJ have so far been unsuccessful, but he sums himself up in his Twitter account this way: “USA, Germany, Singapore or somewhere in between. Purdue University and Northwestern University alum. Non-entitled millennial.”

How do we know he’s actually a man?

JPJ identifies as such in his other tweets.

Back in the ‘70s, Riggs fired up women when he taunted and challenged the best female tennis pros in the game.

“Personally, I would wish that the women would stay in the home and do the kitchen work and take care of the baby and compete in areas where they can compete in, because it's a big mistake for them to get mixed up in these mixed sex matches,” Riggs said.

Billie Jean King accepted Riggs’ challenge in a $100,000 winner-take-all match in the Houston Astrodome on Sept. 20, 1973. King, 29, was the reigning Wimbledon champ. Riggs, 55, was a renowned gambler, hustler and former tennis champ. More than 30,000 spectators showed up to watch the match, with 50 million television viewers tuning in.

“This was the worst thing in the world I’ve ever done,” Riggs later told his son, Larry.

How would JPJ fare against an LPGA pro? He tweets being a 5 or 6 handicap, and that he has prevailed in matches against talented women.

“I played golf with the #1 and #2 women’s golfer at a Big Ten university that won a national title a few years prior,” he tweeted in a reply to Matthew Galloway, Michelle Wie’s regular caddie. “When we’d play the same tees I’d beat her regularly.”

“You could put a male, 0 handicap in every LPGA event and they wouldn’t win one,” he tweeted. “I’d even go as far as saying not even finish in the top 10.” 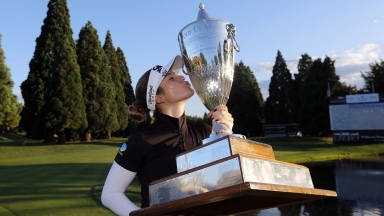 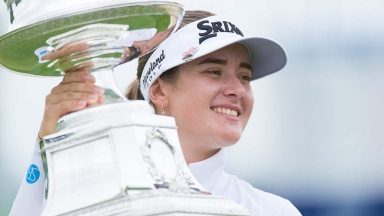 Women's PGA to be played without spectators

Next month’s KPMG Women’s PGA Championship will be held without spectators, the PGA of America announced. 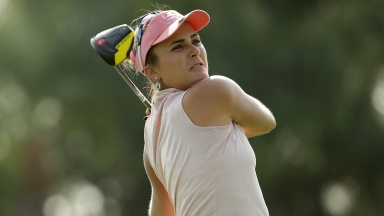 Lexi Thompson is switching things up during the heart of the LPGA’s new major season, and she opened the ANA in 70.