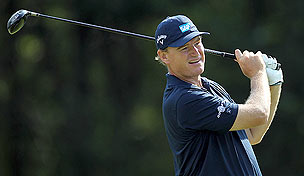 This week the PGA Tour concludes its Florida Swing with the Arnold Palmer Invitational at Bay Hill. Staged in the King's backyard, this event will challenge players from tee to green as the best in the world continue their preparation for the year's first major, now only two weeks away. With that in mind, here is a look inside the numbers to see which players may contend for the title and help your Golf Channel Fantasy Challenge team in the process:

• Defending champion Martin Laird has quietly put together a strong start to his season. The Scot currently ranks in the top 10 on Tour in greens in regulation percentage, par breakers, birdie average and ball striking.

• When considering those with the best track record at Bay Hill, Pat Perez may not be the first name that comes to mind. In nine starts here, though, Perez has three top-10 finishes and has placed no worse than T-44. He may be a solid Group 3 pick this week, having made every cut so far in 2012.

• Ben Crane has cooled off a bit since his hot start to the season, but he's still cashing checks regularly. Crane leads the Tour in the 'bounce back' statistic and still sits inside the top 15 in both strokes gained putting and the all-around category. Like Perez, Crane has never missed a cut at Bay Hill.

• Ernie Els will continue his pursuit of a Masters invitation this week at Bay Hill. His T-5 finish last week in Tampa was only his second top-5 on Tour since 2010 and marked the first time Els finished inside the top 10 in ball striking for a full-field event since the Memorial Tournament in 2009.

• A 'feast or famine' season continues for Robert Garrigus. Though he has made only 4 of 7 cuts in 2012, he now has a pair of runner-up finishes to his credit having lost out to Luke Donald in a playoff last week at Innisbrook. The long-hitting Garrigus, currently 2nd on Tour in driving distance, has improved his approach shots this year considerably. After finishing 86th and 72nd on Tour in greens in regulation in 2010 and 2011, respectively, he now ranks 7th in the category for 2012.

• Thus far in 2012, Webb Simpson has shown no signs of a sophomore slump. Simpson has yet to miss a cut in five stroke play events, finishing no worse than T-38 this year. He shot in the 60s all four rounds in Tampa last week en route to a T-10 finish and ranks near the top on Tour in both the birdie average and par breaker categories.

• Nick Watney is still trying to get his 2012 season on track. While Watney finished the 2011 season 12th on Tour in strokes gained putting and 16th in driving distance, he currently ranks 106th and 104th, respectively, in each category through seven events this year. While he had nine top-10 finishes in stroke play events last year, Watney is still seeking his first such result in 2012.

• Tiger Woods has won this event six times and has finished outside the top 25 only once since 2000. Not sure that there's much to add to that one.

You can watch complete coverage of the Arnold Palmer Invitational Thursday-Friday live on Golf Channel from 3PM-6PM ET.