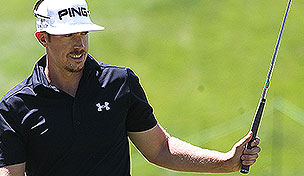 Getty Images
OAKVILLE, ONTARIO - JULY 23: The crowd watches on as Trevor Immelman of South Africa chips onto the sixth green during round one of the RBC Canadian Open at Glen Abbey Golf Club on July 23, 2009 in Oakville, Ontario, Canada. (Photo by Chris McGrath/Getty Images)  -

This week the PGA Tour heads to our nation's capital for the AT&T National. Congressional CC will play host to this event for the first time since 2009, as it was shipped north to Aronimink GC each of the past two years as Congressional prepared to host the 2011 U.S. Open. With the event back inside the Beltway, Nick Watney gets set to defend his title against a strong field, including many of the game's best getting back into action for the first time since the U.S. Open at the Olympic Club. With that in mind, here is a look inside the numbers to see which players may contend for the title and help your Golf Channel Fantasy Challenge team in the process:

• Hunter Mahan is likely happy to see this tournament's scene shift back to Congressional. Twice a winner on Tour this year, Mahan finished T-8, T-12 and runner-up in this event from 2007-2009 on the Blue Course. He continues to have a strong year statistically, ranking fourth in greens in regulation percentage and seventh in total driving, and is coming off a Sunday 61 at the Travelers Championship.

• Another player with a strong track record in this event is Robert Allenby, who has three top-6 finishes in five career AT&T starts - two of which came at Congressional. The Aussie has twice led the field in greens in regulation percentage here en route to finishes of T-6 (2007) and T-3 (2008).

• Defending champion Nick Watney is still searching for the success he experienced in 2011, and much of his struggle this year has been on the greens. Watney ranked seventh last year on Tour in total putting, but this year currently ranks 133rd in the category. His final round scoring average of 72.83 - currently 169th on Tour and more than three shots above his Sunday scoring average in 2011 - has also not helped him climb any weekend leaderboards this year.

• Entering off one of his best finishes of 2012, Will Claxton may be a sleeper to consider in Group 4. Claxton is having a strong rookie season, highlighted by a T-15 finish last week. The Auburn grad has stats to back up his relative success as well, ranking eighth on Tour in greens in regulation percentage and tenth in total driving.

• K.J. Choi won the inaugural AT&T National at Congressional in 2007, and he returns just as his 2012 season begins to show some life. After a T-5 start in Kapalua, Choi failed to crack the top 20 in his next ten starts but has now done so in consecutive events, finishing T-19 at the Memorial and T-15 at the U.S. Open. One place Choi has struggled this year is around the greens; he ranked 20th on Tour in scrambling in 2010 and 27th in 2011, but currently stands 100th in the category for 2012.

• Finding the greens at Congressional in regulation has always been a key for this event; the respective winners finished T-5, T-12 and T-3 in GIR percentage for the week en route to their victories from 2007-2009. One person this may favor as a sleeper pick is Greg Owen, who ranks seventh on Tour in the category. The Englishman has finished T-31 or better in seven of his last nine starts, including T-9 at Memorial and T-11 at the FedEx St. Jude Classic in his last two events.

• U.S. Ryder Cup captain Davis Love III looks to continue his impressive resurgence this week on a course where he has had success in the past. Love has three consecutive top-30 finishes, including a T-3 showing in Memphis, and currently ranks 15th on Tour in scoring average. He finished T-11 at Congressional in last year's U.S. Open and T-16 the last time the AT&T National was held here in 2009.

Tune in to Golf Channel Thursday-Friday from 3P-6P ET for live coverage of the AT&T National.