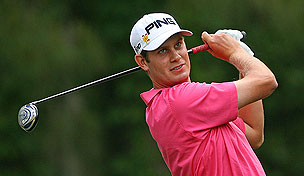 Fantasy players have two events to monitor this week, as both the PGA and European Tours play host to world-class fields. Jason Dufner, Matt Kuchar and many others head to 'Hogan's Alley' for the Crowne Plaza Invitational, contested along the iconic, tree-lined fairways of Colonial CC. Meanwhile, the European Tour conducts one of their biggest events of the year with the BMW PGA Championship, where Luke Donald defends his title. Each venue will put the field to a strong test, and identifying who will rise to the top of each leaderboard may be easier said than done. With that in mind, here is a look inside the numbers to see which players may contend for the title(s) and help your Golf Channel Fantasy Challenge team in the process:

• Few can match the polar opposite results that Harris English has seen across his last 72 holes of competition. Near the top of the leaderboard halfway through The Players, English shot 79-77 across the weekend and faded from contention. In his first action since that event, English shot 60-63 at Gleneagles CC on Monday to easily qualify for the British Open. With four top-20 finishes already on Tour this year, there is reason to think his good play in the qualifier will carry over this week at Colonial.

• One of the keys to success at Wentworth GC is hitting the green in regulation, early and often. Last year, Luke Donald finished T-3 for the week in GIR, and runner-up Lee Westwood finished T-1 in the category. In 2010, Simon Khan led the field in greens in regulation en route to victory. This bodes well for Ian Poulter among others; the Englishman currently ranks fourth on the European Tour in greens in regulation and - along with Westwood - led the BMW field last year in the category.

• Coming off a season-best T-7 finish at The Players, no one has more top-10 finishes on Tour this year than Bo Van Pelt, who has amassed five through 11 starts. Van Pelt continues to excel in a variety of statistical categories: first on Tour in final round scoring average (68.14), second in strokes gained putting, and also ranking in the top 10 in total driving, total putting, birdie average and the all-around ranking.

• This week's example of 'current form meets strong event history' is Zach Johnson. The former Masters champion has finished runner-up in two of his last three starts, including at TPC Sawgrass two weeks ago. Johnson also excels at this event, with three consecutive top-10 finishes - including a win here in 2010. In six career Crowne Plaza starts, Johnson's worst finish is T-30 in 2006.

• Perhaps the hottest man in golf not named Dufner, Ben Curtis will be taking his talents across the pond for the BMW PGA Championship this week. The former British Open champ has four consecutive top-13 finishes on the PGA Tour, including a win at the Valero Texas Open and a runner-up finish at The Players. Curtis will be playing in the BMW for the first time since 2009, when he finished T-6.

• After just two career starts here, Kris Blanks has demonstrated an affinity for Colonial CC, backing up his T-13 debut in 2010 with a T-10 finish last year. Blanks has carded six of his eight tournament rounds here under 70, and each of the last two years he has finished in the top eight in the field for greens hit in regulation.

• Tour rookie John Huh has accumulated 839 FedEx Cup points this year, and he needed nearly every one of them to qualify for his first career major. Huh is now in the British Open field as a result of finishing in the top 20 in the FEC standings following the HP Byron Nelson Championship - an exemption category that also netted spots at Royal Lytham for Johnson Wagner and Kyle Stanley. In fact, Huh secured the 20th and final spot in the standings by a mere five points, ahead of Hyundai TOC winner Steve Stricker. Huh will hope to use this bit of good news as momentum this week at Colonial as he tries to bounce back from last week's event, where he was forced to withdraw due to an elbow injury during Friday's round.

• Boasting a European Tour victory on your resume doesn't exactly make you stand out at this week's BMW Championship - far from it, actually. An impressive 107 players in the field this week have a win to their credit, comprising more than two-thirds of the field. Among those with the most Euro Tour victories to their name sits Ernie Els, who resides nearby and recently helped redesign the course. Els has six top-10 finishes here to his credit, including three runner-up showings, and finished T-16 last year on the course he had a hand in re-sculpting.