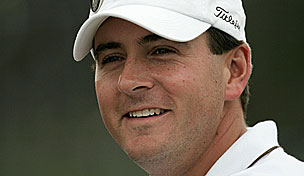 This week the PGA Tour heads to West Virginia for the Greenbrier Classic, which has seen Stuart Appleby fire a closing 59 and Scott Stallings win a dramatic playoff in its first two years of existence. Tiger Woods is making his third start in four weeks fresh off his AT&T National triumph, but a strong field including Phil Mickelson and Webb Simpson will also take to the Old White course. Players looking to contend will need to manufacture birdies early and often at a venue that tends to favor those that can best control their approach shots into the green. With that in mind, here is a look inside the numbers to see which players may contend for the title and help your Golf Channel Fantasy Challenge team in the process:

• The roots of Tiger Woods' 2012 resurgence are evident on his season-long stat sheet. Woods, now a three-time winner on Tour this year, has improved his driving accuracy, greens in regulation percentage and strokes gained putting to levels not seen since 2009. He currently ranks third in ball-striking, leads the Tour in scoring average and in many respects seems to be merely hitting his stride.

• Few people in this week's field not named Tiger Woods seem more prepared on paper to tackle what is shaping up to be a ball-striker's golf course than Ben Curtis. The Valero Texas Open champion currently leads the Tour in strokes gained putting, ranks second in driving accuracy and sixth in greens in regulation.

• Coming off a disappointing weekend at Congressional, Jimmy Walker heads to a venue where he's had recent success in hopes of ironing out his consistency issues. Walker finished T-4 at Greenbrier in both 2010 and 2011, but his weekend performances have held him back from similar high finishes recently. While he ranks 23rd on Tour in scoring average before the cut, he stands 148th in round three scoring average and 129th in final round scoring average, with his weekend averages nearly two full strokes higher than his pre-cut performance.

• Greg Owen continues to play some very solid golf while receiving little if any fanfare. His T-17 showing at Congressional was his third consecutive top-20 finish, and Owen has finished worse than T-31 just twice in his last ten PGA Tour starts dating back to Bay Hill. He ranks eighth on Tour this season in greens in regulation percentage and 13th in birdie average.

• After fading from the lead on Sunday, Brendon de Jonge returns to the Old White course where he has played extremely well the past two years, placing third in 2010 and T-4 last year. De Jonge has now made 11 consecutive cuts this year, with ten of those finishes T-42 or better. He may be one to watch for early in the week, as he currently ranks 13th on Tour in scoring average before the cut and five of his eight career rounds at Greenbrier have been 66 or better.

• Andres Romero continues to ride a suddenly-rejuvenated putter to several solid finishes this summer. In his first start since a runner-up showing at the Memorial, the Argentine placed T-34 at the AT&T National last week. Despite ranking 111th on Tour in strokes gained putting, Romero has been in the top 10 in the field in the category in three of his last four PGA Tour starts. There is reason to believe that this trend will continue; in his only Greenbrier start, he finished T-10 in putts per round last year en route to a T-4 finish.

• After missing four straight cuts from Colonial to Olympic, Brian Harman appears to have regained some of the form that put him on the fantasy radar screen in February and March. Two weeks ago he ranked third in greens in regulation at the Travelers Championship, and last week he finished T-2 among the AT&T National field in putts per GIR. Should he put the two together this week in West Virginia, he may find his name on the Sunday leaderboard.

Tune in to Golf Channel Thursday-Friday from 3P-6P ET for live coverage of the Greenbrier Classic.