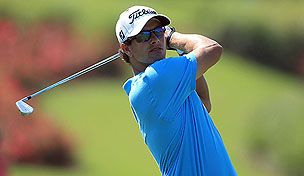 Getty Images
PONTE VEDRA BEACH, FL - MAY 11: Adam Scott of Australia watches his second shot at the par 4, 18th hole during the second round of THE PLAYERS Championship held at THE PLAYERS Stadium course at TPC Sawgrass on May 11, 2012 in Ponte Vedra Beach, Florida. (Photo by David Cannon/Getty Images)  -

This week the PGA Tour returns to Texas once again as Keegan Bradley defends his maiden victory at the HP Byron Nelson Championship. TPC Four Seasons Las Colinas plays host this week, a par-70 layout that is among the more difficult courses tee-to-green that players will see this year. Although many of the world's best are in Europe for the Volvo Match Play, the Nelson field still boasts former champions Phil Mickelson and Adam Scott, as well as Matt Kuchar who is fresh off his win at TPC Sawgrass. With that in mind, here is a look inside the numbers to see which players may contend for the title and help your Golf Channel Fantasy Challenge team in the process:

• Few courses on the Tour schedule can fluctuate in difficulty as much as TPC Four Seasons. Consider that in 2009, Rory Sabbatini won with a -19 total and each of the top five players shot in the 60s each round; in contrast, -3 was enough to get into a playoff last year for Keegan Bradley and Ryan Moore as strong winds took their toll on the players. The forecast this week shows some wind, but not the 30+ MPH gusts that were seen a year ago.

• D.A. Points will look to bounce back from a back injury that cost him a spot in the field at TPC Sawgrass on another TPC course that certainly fits his eye. Points, who withdrew just before teeing off last Thursday due to back spasms, has two top-10 finishes in his last three starts here and was runner-up to Rickie Fowler in the Wells Fargo playoff two weeks ago.

• What Adam Scott lacks in quantity on the PGA Tour in 2012 he has made up for in quality thus far. Having made only four stroke play starts in the U.S. this year, he has finished no worse than T-17 in each event. Since winning this tournament in 2008, though, Scott has only made one appearance here - missing the cut in 2009.

• Brian Gay is still looking to get his season on the right track despite typically stellar short game statistics. Gay ranks in the top 10 on Tour in scrambling, sand save percentage and strokes gained putting, but has only one finish inside the top 40 in his last eight starts. Three top-14 finishes here in the last four years though, including a runner-up performance in 2010, indicate that he may find his footing this week.

• Several in the field will look to follow in the footsteps of Keegan Bradley and Jason Day, winning in their first start at TPC Four Seasons. The group of first-timers includes Seung-Yul Noh, who has a T-9 finish at Quail Hollow and a T-13 showing at Zurich among his last three Tour starts.

• On a course that emphasizes solid ball striking, Roberto Castro may be a name to consider in Group 3. The Texas native ranks in the top 10 on Tour in both driving accuracy and greens in regulation; in his last start at Quail Hollow, Castro hit 15/18 green in three of his four rounds.

• Last year Ryan Palmer defied the notion that past event performance is any indicator of success. Prior to his runner-up finish in 2011, Palmer had played in this event seven times - finishing T-73 in 2006 and missing the cut six times. Always one of the longer hitters on Tour, this year Palmer has improved on the greens, moving from 95th in total putting to 21st thus far this season.

Tune in to Golf Channel Thursday-Friday from 3-6PM ET for live coverage of the HP Byron Nelson Championship.