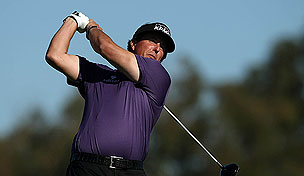 Getty Images
PACIFIC PALISADES, CA - FEBRUARY 20: Ben Curtis hits his approach shot on the fifth hole during the second round of the Northern Trust Open on February 20, 2009 at Riviera Country Club in Pacific Palisades. California. (Photo by Stephen Dunn/Getty Images)  -

This week golf fans around the world will tune in to watch what many describe as the best event of the golf season - The Masters. The year's first major is at stake as 96 players tackle Augusta National in nothing short of mint condition. All of the world's best players have their eyes set on following Charl Schwartzel's name in the history books, either to pad their career resume or to make the leap into the exclusive club of 'major champions.' With that in mind, here is a look inside the numbers to see which players may contend for the title and help your Golf Channel Fantasy Challenge team in the process:

• Fairways and greens...sometimes it's really that simple. Since 2000, each Masters champion has finished in the top four in the field in either driving distance, greens in regulation or putts per round. Five of the 12 winners finished in the top four in two of the three categories, and Trevor Immelman pulled off the clean sweep en route to victory in 2008. That year, the South African finished 4th in driving distance, 2nd in GIR and 4th in putting.

• This year's crop of first-time Masters participants may be one of the best in recent memory. Headlining the group of 14 Augusta rookies is Keegan Bradley, who will be the first player to make his Masters debut having already won a major championship since Ben Curtis in 2004. The reigning PGA champion has finished T-22 or better in all nine starts on Tour this year.

• Tiger Woods enters this week with his game statistically as good as it has been in years. Woods led the field in driving en route to a T-2 finish at Honda, then led the field in greens in regulation and finished 4th in strokes gained putting while winning at Bay Hill. Should all three facets of his game be in top form, he'll likely take home a fifth green jacket.

• Former PGA champion Martin Kaymer has been a mainstay on leaderboards at big events the last 2+ years, but he is still seeking his first made cut at the Masters in his fifth appearance. The German's consistent fade usually holds up under major championship pressure, but a right-to-left ball flight is required to take advantage of several holes at Augusta National and Kaymer has struggled to add that shot to his game.

• Capitalizing on the par-5s at Augusta National has nearly been a requirement for victory in recent years. Since 2006, five of six Masters' champions have played the par-5 holes in -9 or better for the week, including Zach Johnson who played the holes in -11 in 2007 despite never going for the green in two.

• Though his is not quite a household name, no one has more top-10 finishes on Tour this year than Bo Van Pelt. The Oklahoman has finished ninth or better in each of his last four stroke play events dating back to the Waste Management Phoenix Open, and he finished T-8 at Augusta last year. Van Pelt currently leads the Tour in birdie average, par breakers and strokes gained putting.

• Few players have shown an ability to raise their game on the major championship stage quite like Angel Cabrera. In fact, the 2009 Masters champion seems to reserve his best play only for the majors, specifically this week. Cabrera has four top-10 finishes here to go along with his 2009 triumph, and has only been outside the top 25 once since 2006. His seventh place finish here last year was his best finish on Tour during the 2011 FedEx Cup season.

• The drought for Australians at Augusta continues into this year, although a trio came close to breaking through in 2011. Jason Day and Adam Scott both finished runner-up, but Geoff Ogilvy, who finished T-4, may be the most likely to take the title back to Oz. In six starts on Magnolia Lane, Ogilvy has finished in the top-26 five times and has never missed the cut. His right-to-left ball flight and length off the tee are an ideal fit for Augusta National.

• Often a Fact Pack favorite here in 2012, Johnson Wagner could find out shortly how the 'stache looks against a green jacket. Wagner leads the Tour in par-5 performance, clearly a key at Augusta, and has finished in the top 30 in eight of ten events this year on Tour, including a win in Hawai'i.

Tune in to Golf Channel all week long for comprehensive Live From: The Masters coverage.