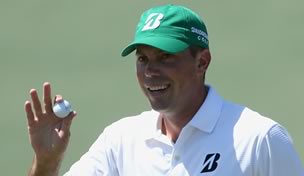 Getty Images
JERSEY CITY, NJ - AUGUST 29: Steve Marino walks to his ball after missing his birdie attempt on the 18th green during round three of The Barclays on August 29, 2009 at Liberty National in Jersey City, New Jersey. (Photo by Kevin C. Cox/Getty Images)  -

Still coming to grips with yet another amazing Sunday at Augusta, the golf world heads up the East Coast a bit to Harbour Town Golf Links for the RBC Heritage this week. Where the Masters has often rewarded longer hitters, the Heritage plays into the hands of the accurate ball-strikers on Tour. Defending champion Brandt Snedeker will be facing a full field of golfers, including world No. 1 Luke Donald who he had to beat in a playoff last year to claim the tartan jacket. With that in mind, here is a look inside the numbers to see which players may contend for the title and help your Golf Channel Fantasy Challenge team in the process:

• World No. 1 Luke Donald is in the field this week eager to improve upon his runner-up finish last year. Donald currently leads the PGA Tour in strokes gained putting, total putting and scrambling from the rough, and he will have three consecutive top-three finishes at Harbour Town to draw from.

• One of the biggest surprises of 2012 continues to be the emergence of John Huh. Already a winner in Mayakoba, Huh has four top-14 finishes already this year. In finishing T-14 in his last start in Houston, Huh averaged only 27.8 putts per round - the second-lowest average in the field that week.

• No one dominated this event like Brian Gay did in 2009, winning by ten shots and setting a new scoring record. The consistent ball-striker has struggled on Tour this year since a T-6 finish in Hawaii, somewhat due to the fact that Gay is currently outside the top 50 on Tour in driving accuracy. He does rank 7th in total putting, though, which will be a key if Gay is to turn his season around at Harbour Town.

• 11 seems to be the key number this year for Jim Furyk, who finished 11th last week for the third time in seven starts on Tour. The 2010 Heritage champion currently ranks 6th on Tour in scoring average and is quietly putting together a solid start to his season.

• Looking to continue the momentum from his Sunday 64 at Augusta, Bo Van Pelt is looking for his fifth top-10 finish of the season. BVP currently sits atop the Tour standings in both total driving and the all-around ranking - a potent combination should that trend continue this week on Hilton Head.

• The greens at Harbour Town are among the smallest that players will face on Tour all year, so hitting the green in regulation will be paramount for those players looking to go low. Bryce Molder currently ranks third on tour in GIR percentage, as well as fourth in strokes gained putting, and may be a threat to challenge this weekend.

• Another player quietly compiling a great start to 2012 is Zach Johnson, who has yet to miss a cut and has finished in the top 33 in all but two starts this year. Johnson ranks eighth in driving accuracy, which should help him navigate the notoriously tight fairways of Harbour Town.

• There may not be a hotter golfer right now than Matt Kuchar, whose T-3 performance at Augusta was his fourth consecutive top-10 finish dating back to the WGC Match Play. Kuchar ranks in the top 25 on Tour in both driving accuracy and greens in regulation percentage, and his 69.46 total leads the Tour in actual scoring average. Kuchar's is likely a name you will see on the leaderboard on Sunday, as he tees up a short drive from his alma mater of Georgia Tech.

Tune in to Golf Channel Thursday-Friday from 3:00p-6:00p ET for live coverage of the RBC Heritage.