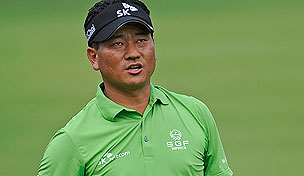 Getty Images
MORELIA, MEXICO- APRIL 26: Suzann Pettersen of Norway and Lorena Ochoa of Mexico talk on the 5th green during the final round of the Corona Championship at the Tres Marias Residential Golf Club on April 26, 2009 in Morelia, Michoacan, Mexico. (Photo by Donald Miralle/Getty Images)  -

This week the PGA Tour heads to Innisbrook for the Transitions Championship. Ranking 27th in difficulty out of 51 courses on Tour in 2011, the Copperhead Course will require strong performance off the tee as well as deft touch on and around its bermuda greens. Many of the world's best players are in the field this week as they continue to prepare their game for the season's first major, which is now only three weeks away. With that in mind, here is a look inside the numbers to see which players may contend for the title and help your Golf Channel Fantasy Challenge team in the process:

• John Senden continues to quietly compile a strong start to his 2012 season. His T-6 finish at Doral marked his third top-10 finish in his last four starts, and the Aussie currently leads the Tour in ball striking, a category that combines total driving and greens hit in regulation.

• Another player performing well this year but staying under the radar is Group 3 golfer D.A. Points. Points has four top-12 finishes in seven starts this season, including a T-12 at the Honda Classic in his last event when he finished T-8 in the field in driving accuracy and T-10 in greens in regulation. For the season, Points ranks in the top 30 on Tour in both categories.

• Boo Weekley’s T-3 finish in Puerto Rico last week was surprising to say the least – it marked Weekley’s first top-20 finish on Tour in over a year. The key to his island success was largely his putter; Weekley finished the week T-12 in the field in putts per round, including only 26 putts en route to a final round 66.

• Jimmy Walker will be in the field in Tampa looking to regain the form that yielded three top-10 finishes on the West Coast Swing. Walker was in position for a high finish at Honda before struggling on the weekend, including a final round 81. He, like Weekley, will look to his putter to provide a high finish this week, as he ranks 22nd on Tour in total putting in 2012.

• Last week’s WGC winner, Justin Rose, will return to friendly confines this week at Innisbrook. In six career starts at this event, Rose has finished no worse than T-30, including a T-5 finish last year in which he shot back-to-back 65s in the second and third rounds.

• Defending champion Gary Woodland will be making his second career trip to Innisbrook in hopes of jump-starting his season as this event did last year. So far in 2012, Woodland has yet to crack the top 20 in six starts, his best finish being 24th at the winners-only Hyundai TOC. While length off the tee is not a problem for Woodland, accuracy has been – he has hit barely more than 50% of the fairways so far this season.

• Twice a winner in Tampa, Retief Goosen returns to Innisbrook hoping to play through back discomfort that has plagued him so far this year. As Rex Hoggard reported earlier this week, Goosen will soon head to Germany to visit the same back specialist that has succesfully treated Vijay Singh and Fred Couples. The two-time U.S. Open champion has struggled tee-to-green in 2012, currently ranking 187th on Tour in total driving and 188th in greens in regulation.

You can watch complete coverage of the Transitions Championship Thursday-Friday live on Golf Channel from 3PM-6PM ET.