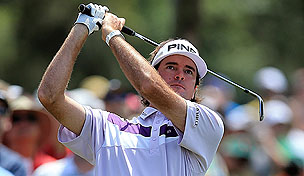 Getty Images
GIRONA, SPAIN - APRIL 30: Pablo Larrazabal of Spain points out the camera to his caddie Rod Gutry on the ninth tee box during the first round of the Open de Espana at the PGA Golf Catalunya on April 30, 2009 in Girona, Spain. (Photo by Warren Little/Getty Images)  -

With The PLAYERS only two weeks away, many of the world's best are back in action this week in New Orleans in order to fine-tune their games. Among those returning to action is defending Zurich champion Bubba Watson, making his first start since claiming his green jacket. This week's field will present a stern challenge, though, across a TPC Louisiana course that will yield birdies but demands accuracy off the tee and into the greens. With that in mind, here is a look inside the numbers to see which players may contend for the title and help your Golf Channel Fantasy Challenge team in the process:

• Should you expect a Masters hangover from defending champion Bubba Watson? Perhaps not. Since 1997, eight of the past 15 Masters champions have finished 6th or better in their next PGA Tour start. In that same time frame, only two Masters winners have missed the cut in their first start back - Trevor Immelman (2008) and Angel Cabrera ('09). Most recently, Phil Mickelson followed up his 2010 green jacket with a runner-up finish at Quail Hollow.

• Charles Howell III has now notched six consecutive finishes inside the top 30. As a player with a pair of runner-up finishes at TPC Louisiana, he may be a name to watch this week.

• Matt Every's runner-up finish last week marked a high point in what has already been his most successful year on Tour. Much of the credit goes to his ability to close on Sunday; Every's 69.67 final round scoring average currently ranks 5th on Tour.

• Webb Simpson returns to the course where he very nearly picked up his first career win last year, with the hopes of turning around what has been a mediocre 2012 season by his standards. Much of Simpson's struggles this year have been off the tee; while he ranked 24th in total driving last year, he currently stands 121st on Tour in that category for 2012.

• TPC Louisiana has consistently ranked among the more difficult courses on Tour in terms of proximity to the hole. This should favor consistent ball-strikers like Steve Stricker, who currently leads the Tour in that category and has three top-13 finishes in his last four starts here.

• Aussie John Senden will be making his first start since missing the cut at Augusta National. You'll have a hard time finding a more well-rounded stat line than Senden's this year, as he currently ranks 3rd on Tour in GIR percentage, 7th in total driving, 8th in birdie average and 10th in the all-around ranking. His T-13 finish here last year means he may be poised to bounce back from a poor Masters showing.

Tune in to Golf Channel Thursday-Friday from 3-6PM ET for live coverage of the Zurich Classic of New Orleans.