There’s a new golf tournament taking place this week with a limited field, an exciting format and a bunch of recognizable names.

Liberty National hosted the 2017 Presidents Cup, and the team format used that week is the format this new series will employ. It will feature 12 iconic professional athletes from the U.S. competing against their counterparts from around the world.

Here are the rosters for both teams:

Two members of the international team are yet to be revealed.

The two teams will compete against each other over the course of six sessions. There will be three 10-hole match play sessions each day, consisting of fourballs and greensomes (similar to foursomes), and the event will conclude with head-to-head singles matches.

Day 1 will not be televised, but you can tune into Day 2 – which will feature the singles matches – Friday from 2-6:30 p.m. ET on NBC’s Peacock.

The Icons Series plans to have similar events all over the world, with Australia, Asia, Europe and the Middle East already determined as future host sites. 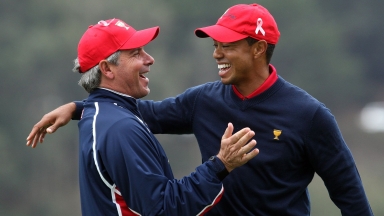 Fred Couples had the 2009 U.S. Presidents Cup team thinking he'd bench Tiger Woods in case the International had an injury.

Jimenez with lead over Couples in PGA Champions

Heading into the final day of the PGA Tour Champions’ American Insurance Championship, has the lead shooting a 69 on Saturday.