Grit, guile and brass ... Cameron Smith's bold route to gold at The Players 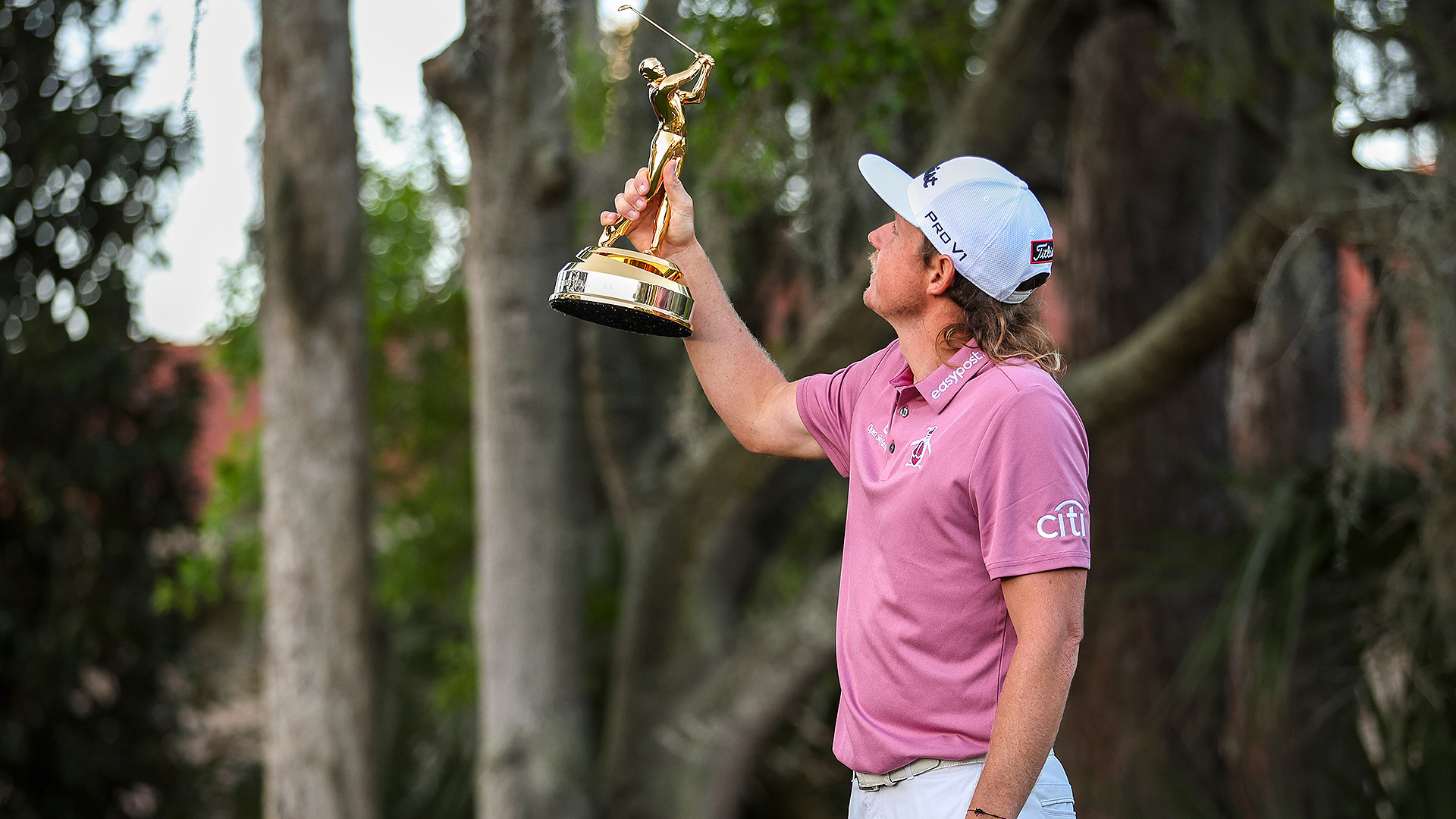 PONTE VEDRA BEACH, Fla. – Matt Kelly was standing outside the ropes when Cam Smith’s 9-iron began its descent toward the island green.

Leading by two shots, Smith’s plan should have been obvious: Middle of the green. Two-putt par. Move on.

Ah, but that’s not Smith’s style.

Even on this grand stage. Even in this tenuous moment.

“Cam just has the biggest balls,” said Kelly, who caddies for Marc Leishman. “I’m standing there watching that ball in the air like, Oh my god, what is he doing? But sure enough, that’s what he’s trying to do. He’s trying to make 2 there.”

Smith’s shot landed 4 feet, 4 inches right of the flag – the second-closest all day at TPC Sawgrass’ notoriously difficult 17th. That birdie may have given Smith the cushion he needed to win this Players Championship, but his fearless final hour was little surprise to those who know him best.

“He’d prefer to lose it on a shot than not win it,” said Jack Wilkosz, his best friend since ninth grade. “He’ll take on the smallest gap you have and be 100% for it. He’s gonna be aggressive. That’s what he’s known to do, so he’s gonna stay that way.” 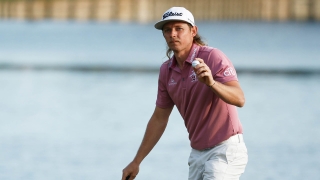 Cameron Smith's putter showed up when he needed it this week at The Players Championship, and his wedges helped seal the deal.

Knowing he needed to attack a “soft and sticky” course after a week of heavy rain, Smith’s 10 final-day birdies matched the most in a competitive round at TPC Sawgrass. He filled it up early, with four birdies to open. He filled it up in the middle, with four birdies to jumpstart his second nine. But we’ve known for a while that when he gets hot, few can keep pace: In all three of his stroke-play victories, he has led the field in putting – a stat that includes his torrid week at Kapalua, when he shot 34 under par to shatter the Tour scoring record and hold off world No. 1 Jon Rahm. And, sure, his putter carried him here at The Players, too. In the final round, he holed 136 feet worth of putts and, for the week, gained more than 11 ½ shots on the field on the greens.

“That’s an Australian attitude,” said his caddie, Sam Pinfold. “Loves fighting. Doesn’t back down. He’s very aggressive. He backs his short game a lot, so he takes on pins or does stuff that others wouldn’t recommend. He’ll just get the lob wedge out, flick it close and away we go.”

After all, that’s what carried him to his first PGA Tour win (with partner Jonas Blixt) at the 2017 Zurich Classic, where Smith birdied the last two holes on his own ball and then again on the fourth playoff hole. And he never backed down during his first solo victory at the 2020 Sony Open, making birdie on the final hole to force overtime. And last year at the Zurich – this time, while partnered with countryman Leishman – Smith showed his mettle in a playoff after Louis Oosthuizen found the water off the tee.

“Cam had to stand up and hit that shot, and all of a sudden, that fairway looks very small,” Kelly said. “And sure enough, he hits the exact shot he had to. He’s always trying to hit the right shot. He’s not interested in playing safe.

“There’s no shying away. There’s no bailout. That’s what today’s finish reminded me of – taking the bull by the horn and hitting the shot that’s required, not shying away from it.”

Like any risk-taker, there have been times when Smith’s gambles backfired. Last year was easily his most successful as a pro (top-10s in a third of his starts), but he also came up empty in big spots. At the WGC in Memphis, he drilled a tree and went out of bounds while trying to play a hero shot on the 72nd hole. In sudden death at the FedExCup playoff opener, he splashed his tee shot in the Hudson River to hand the title to his opponent.

“It’s been our downfall a couple times,” Pinfold said. “We’ve had a couple close calls where being aggressive hasn’t worked for us. But that’s what you have to do out here. There’s too many good players. There’s too much low scoring to play soft. You have to have a crack.

“It’s nice now when you’re in this position when you’re high enough in the world rankings or FedExCup where losing a few dollars or points here or there won’t have a huge effect. But he’s a very aggressive player.”

And that’s how Smith attacked the final few watery holes at TPC Sawgrass.

Clinging to a slim lead, he snap-hooked his drive into the trees on the par-5 16th, leaving him little choice but to pitch out diagonally. He had 238 yards to the flag for his third shot.

“I think that’s where it could have gotten away from me a little bit,” Smith said. “Hitting over the corner of the water there can get quite nervy.”

A slight push there wouldn’t cover the water, meaning he’d drop at least a shot, perhaps two, with his closest pursuers still to go. But he was unafraid of the consequences. Smith ripped a 3-iron perfectly on his target line, at the left edge of the green, pin-high and 50 feet from the flag.

“That was one of the best swings of the day,” Pinfold said. "That could have gone anywhere, but to stripe a 3-iron under that pressure, into that green, was pretty impressive. That’s exactly where we tried to go.” 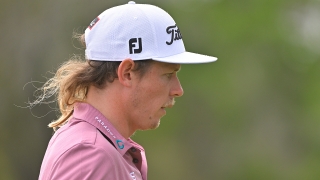 Players purse: How the $20 million was paid out

Here are complete purse and FedExCup breakdowns for Smith and the rest of the players who made the cut at The Players.

By comparison, then, the tee shot on 17 was easy: 137 yards, the wind slightly into and from the right, a comfy 9-iron. Smith’s line was directly over the bunker, about 10 feet left of the flag ... and he pushed it, slightly, leading to a few anxious moments in the air.

“I was like, That better be on land,” Wilkosz said.

“As long as we had the number right, it was gonna be brilliant,” Pinfold said.

“I’d be lying if I said I was aiming there,” Smith said, laughing. “But I still wanted to stay aggressive, still wanted to make birdie. My heart was in the throat there for a second, but I knew it was the right club.”

His ball safely covered the water and plopped 4 feet away. The crowd roared. Smith returned the 9-iron to Pinfold, with a knowing grin.

Now with a three-shot lead and the treacherous 18th to go, Smith could have taken out a long iron and played for bogey. It wasn't even a consideration. Almost immediately he reached for driver, wanting to send his tee shot as far down as he could, even if he blew it into the right trees. Indeed, his ball found the pine straw and his pitch came out hot, rocketing about 50 yards farther than intended, scampering across the width of the fairway and tumbling into the pond.

“Let’s slow down,” Pinfold said as they walked toward the green for their fourth shot, but soon the pressure ratcheted up even more. About 500 yards away, a roar rang out: Lahiri had birdied the 17th, cutting his deficit to two. Or soon, perhaps, even fewer.

While Smith sorted out his drop options, the electronic leaderboard showed the replay of another messy finish from an Australian. Back in 2004, Adam Scott came to the 72nd hole with a comfortable lead and tugged his approach into the water. But instead of collapsing, he summoned the grit to hole a 10-footer to win, punctuating his victory with an iconic fist pump.

His 60-yard wedge shot landed a few feet short, hopped behind the flag and nearly spun back into the cup for an improbable par.

“The next shot, that’s Cam Smith right there,” Pinfold said. “Not just the wedge shot itself, but the grit and the balls to do that right after and not even think about it.”

Smith’s gutsy one-shot victory was finalized a few minutes later, and the scoring building erupted with cheers. Inside, he was mobbed by his mother and sister, whom he hadn’t seen since December 2019 because of COVID restrictions in Australia. Waiting outside, in tears, was Wilkosz, his best mate, who moved to Florida four years ago to serve as Smith’s personal assistant, a wide-ranging role that covers everything from weightlifting spotter to swing videographer to pint-drinking partner.

“They breed ’em tough in Queensland, where we’re from,” he said. “For every sport, we’re mentally tough. He’s 100% into everything he does. He won’t back out. He won’t take the soft option. He’ll stick to the hard option every time.”

That means taking on the par-5 16th with a 3-iron and everything to lose.

That means finishing right of the flag on the island green, with just 7 feet to spare.

That means getting up-and-in while flirting with disaster.

“He’s done it enough times now to not doubt himself ever,” Kelly said. “It’s pretty admirable. To be where he is now, potentially just the beginning of his star career, where he wants to be, yeah, it’s not surprising to any of us that have followed him.”

Smith chose the bold route – and pulled it off, again. 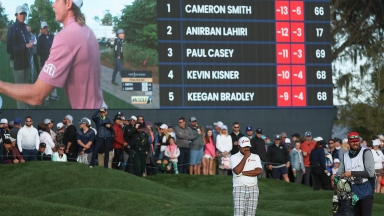 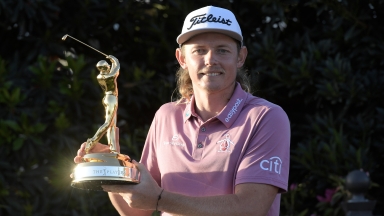 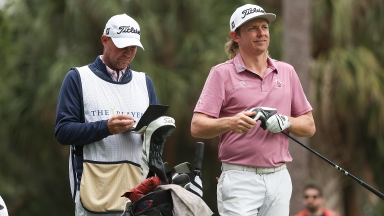 Cameron Smith captured one of the most prestigious titles in golf on Monday. Here are the winning clubs.