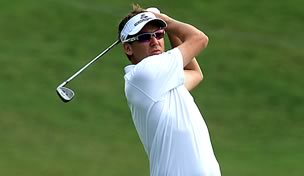 In winning the PGA Championship, Rory McIlroy further cemented his spot atop the European Ryder Cup points list. A more notable move, though, was made by the man who challenged McIlroy for much of Sunday afternoon - Ian Poulter. With his T-3 finish, Poulter moved ahead of Sergio Garcia for the tenth and final qualifying spot with only one event remaining before the standings become finalized.

The top 5 after the PGA Championship (points in parentheses):

The next five players will be the highest five on the World Points List not already on the team. Currently, that handful of players would consist of the following in order of their position on the list (points in parentheses):

Olazabal will finalize his team by making two picks. Here are a few players currently on the wrong side of the bubble who could be considered for the final two spots:

Sergio Garcia: Having missed the cut at Kiawah, Garcia is now on the outside looking in. With his strong Ryder Cup resume and friend and countryman Olazabal at the helm, he is likely to top any list of captain's pick nominees.

Nicolas Colsaerts: The Belgian missed the cut at the PGA, but proved his match play ability earlier this year with a win at the Volvo World Match Play Championship in May.

Padraig Harrington: Harrington had another solid showing at the PGA Championship, finishing T-18. The Irishman now has been inside the top 20 in seven of his last eight starts worldwide.

David Lynn: A surprise runner-up on the Ocean Course, Lynn vaulted from 28th to 13th on the World Points list but may need a repeat performance at Gleneagles to merit consideration.