Just 'business as usual' inside the ropes for Cam Smith, Rory McIlroy at East Lake 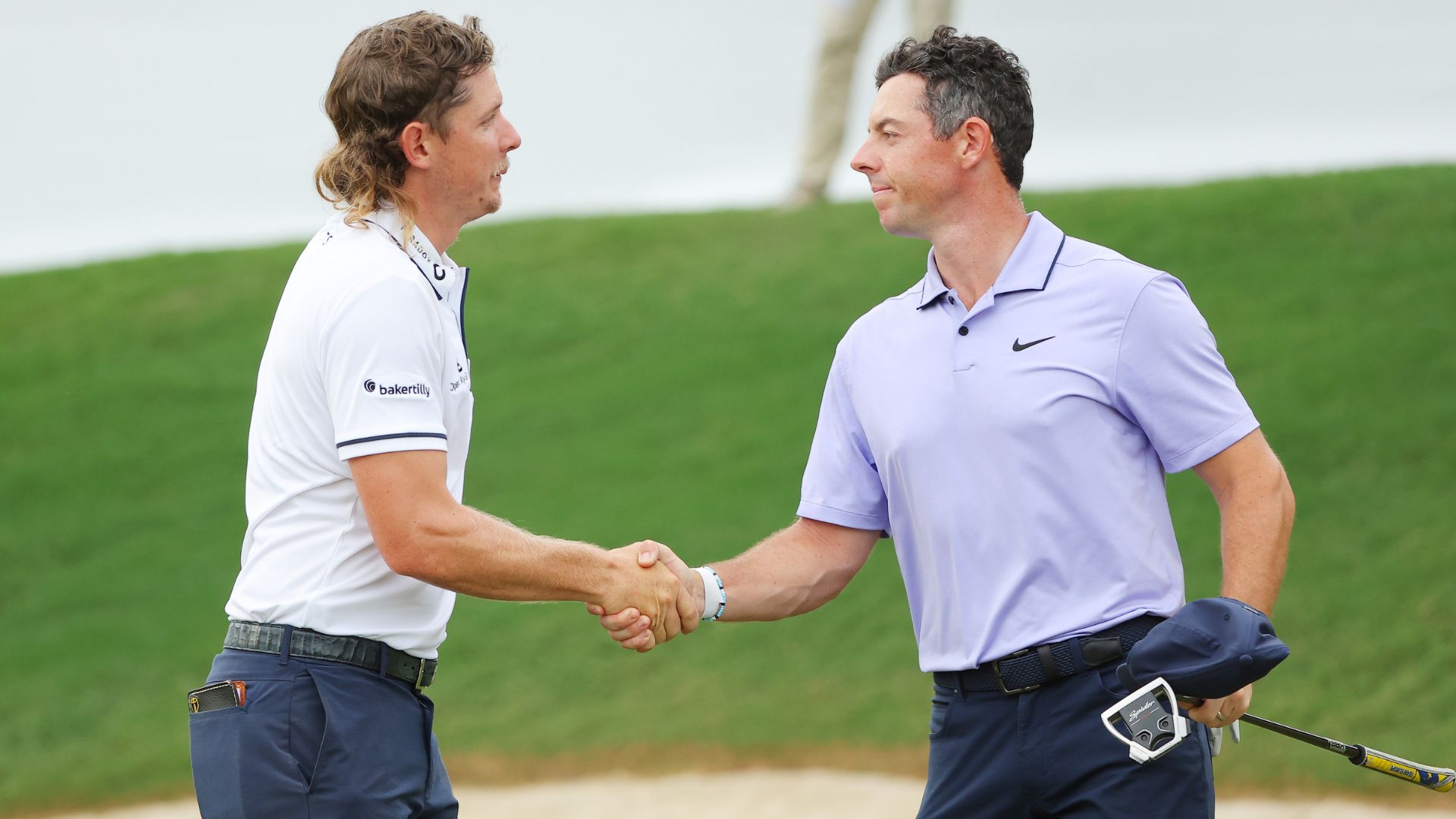 ATLANTA – This entire PGA Tour season has been one long soap opera, but two of the leading protagonists didn’t provide any juicy subplots Thursday at the Tour Championship.

After Will Zalatoris’ withdrawal altered the pairings sheet, golf fans circled the 1:45 p.m. tee time – as if Rory McIlroy, ardent Tour supporter, and Cameron Smith, rumored LIV defector, were suddenly about to throw down at East Lake in a battle for the soul of the game.

It was the same divisive energy that had fueled the non-controversy earlier in the FedExCup playoffs, when Scottie Scheffler walked in front of Smith as he read a putt and received a disbelieving look that quickly became a viral meme. Except it wasn’t a brash display of unsporting behavior by Scheffler; it was a momentary brain cramp. Amazed about how overblown the non-issue became, they even discussed a silly rebuttal, if only Scheffler hadn’t been laughing too hard to pull it off.

There were no hard feelings that day, and there was no frostiness in the opening round here, either. Players might have privately grumbled about Smith’s position here, but McIlroy didn’t give him the cold shoulder. Far from it, in fact. He walked with Smith up fairways, praised his many good shots and chatted amiably during long waits.

“Cam and I get on really well,” McIlroy said. “Always have.”

Smith has deflected – but not denied – several reports that he has signed with LIV Golf and will be bolting for the rival league immediately after the Tour season concludes. Smith said any definitive statements on his playing future will come directly from him, and in a brief interview Wednesday, he reiterated that he’s here, simply, to “hit good shots and make putts.”

Smith’s potential departure would be a significant blow for the Tour and a stunning coup for LIV boss Greg Norman, who has mostly lured past-their-prime talents and misfits to his upstart league. Smith, of course, is neither: He’s 28, well-liked, and coming off a breakout year. His would be a disappointing move for golf fans who care about watching the best players – all of the best players – compete together more often.

McIlroy revealed Wednesday that he spoke with Smith two days after The Open. Smith already had an awkward encounter in his winner’s press conference at St. Andrews, when he tersely answered a reporter’s question about his LIV interest by saying the timing of the inquiry was rude and that his team handles all his off-course matters. In that call, McIlroy said he wanted to present the framework for what Smith’s next decade on Tour could look like – the showcase of stars, the beefed-up legacy events, the riches. The message was clear: This is what you might be giving up.

“I just don’t want people hearing information from one side and not from another,” McIlroy explained.

It doesn’t appear as though his pitch changed Smith’s mind – and to McIlroy, that’s OK.

For the past few months, he has been abundantly clear how he views the defectors.

At the Memorial, McIlroy said he was trying to put himself in other players’ positions and acknowledged it’s a personal choice.

At the Canadian Open, he said that he understood why some chose to leave – even if he believed, from own experience, that making decisions based solely on money didn’t often end well.

At the playoff opener, he said that he didn’t “begrudge” anyone – but that some of the lingering resentment stemmed from those who left and also wanted to return to the Tour to enjoy some of the membership perks.

And on Thursday at the Tour Championship, well, McIlroy once again reiterated his stance, when asked if it was a different vibe while paired with Smith.

“It was business as usual,” he said. “I keep saying, no matter what decisions are made or what choices are made by anyone, it doesn’t make them a bad person. Does it make me disagree with them? Of course it does. But I disagree with a lot of people that I like and love.”

Still, Smith’s presence here does leave open the intensely awkward scenario that he could claim both of the Tour’s top prizes this season – The Players Championship and FedExCup – and then saunter over to its chief rival, with whom the Tour is now sparring in court.

Smith isn’t yet out of contention. With the staggered start at the Tour Championship, Smith and McIlroy entered the event six shots behind Scheffler and shot matching 67s, even if they arrived at those scores quite differently. 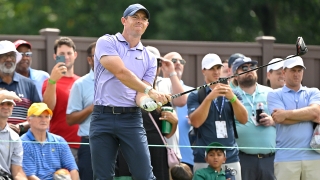 It was a disastrous start to the Tour Championship for Rory McIlroy, who hit his opening tee shot out of bounds.

Uncommitted to his opening tee shot, McIlroy tried to guide a cut driver in a downpour but ended up double-crossing it left, over the out-of-bounds fence. He made triple bogey and then added a bogey on the next hole, but he somehow didn’t blow himself out of the mix. On a wild day in which he recorded just four pars, he came home in 31 and remained in a tie for sixth – though he now drifted eight shots back of Scheffler with 54 holes remaining.

Smith’s round was more of a slog. Having skipped last week’s event to nurse a lingering hip injury (dropping him from third to sixth in the points standings), Smith’s issue flared up again Thursday on the spongy, rain-softened fairways. Unable to drive into his lead hip, Smith pushed several shots weakly to the right and was significantly outdriven by McIlroy, sometimes by 50 yards.

“It’s probably the first time in a long time that I feel like it’s affected my golf,” Smith said.

At times, he dragged behind the rest of the group and walked with his driver for support. He kept a Hyperice therapy gun strapped to his golf bag like a rangefinder. But with the short field, he has ample time to meet with his trainer for some post-round treatment.

“I’m feeling not too bad,” Smith said. “Probably just annoying, to be honest. It’s not like my leg is going to fall off. It’s not like it’s shooting pain to my head. It’s just annoying, and so I tried to keep the output of that pretty low and save it a little bit for the rest of the week.”

In the opening round, at least, he hobbled around East Lake mostly unbothered by fans who either didn’t know or didn’t care that he might soon be playing his regular-season golf elsewhere. “That’s a 100 mil walk coming up!” one fan behind 18 shouted at Smith, but the comment didn’t land. There’s pain to push through, top players to chase down, a tournament to win. The soap opera can resume in a few days. 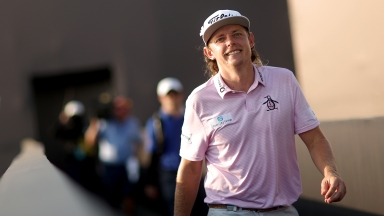 Smith misses Aussie cut after 'a few too many'

Cameron Smith was a few beers deep when he found out his made the cut at the Australian Open. He then missed the next cut. 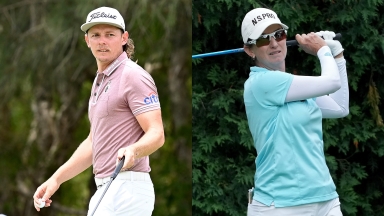 Men and women, amateurs and professionals, and all-abilities players will play alongside one another in Melbourne. 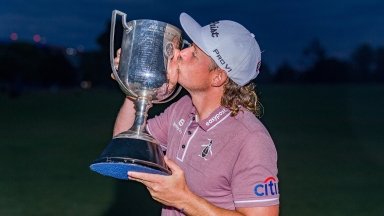