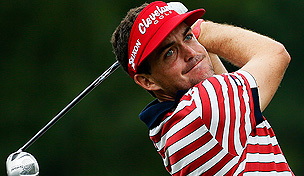 Getty Images
PONTE VEDRA BEACH, FL - MAY 04: Tiger Woods talks to the media during a press conference after playing a practice round prior to the start of THE PLAYERS Championship held at THE PLAYERS Stadium course at TPC Sawgrass on May 4, 2010 in Ponte Vedra Beach, Florida. (Photo by Scott Halleran/Getty Images)  -

With his win at the WGC-Bridgestone Invitational, Keegan Bradley moved from the bubble position into a comfortable spot at fourth in the current U.S. Ryder Cup standings. Tiger Woods maintains his lead at the top, and Phil Mickelson now occupies the tenuous eighth position (Click here to view the current European Ryder Cup standings).

Following the PGA Championship on Aug. 12, eight players will automatically qualify for the U.S. team, captained by Davis Love III. With only one event left before the top eight spots are finalized, here are the current standings (with points earned and last week’s position in the top eight in parentheses):

Love also has four wild-card selections he will make in September. Here are some current notables:

9. Hunter Mahan: Twice a winner on Tour in 2012, Mahan has cooled a bit in recent weeks and is now on the outside looking in. A solid finish this week will likely give him the opportunity he has sought since leaving the final green at Celtic Manor.

10. Steve Stricker: Fresh off a runner-up finish in Akron, Stricker now has two top-five finishes in his last three starts and will be a name to watch this week at the PGA Championship.

11. Jim Furyk: A season of remarkable consistency may now be remembered more for the ones that got away. Furyk has played on every U.S. Ryder Cup team since 1997.

12. Rickie Fowler: A winner earlier this year at Quail Hollow, Fowler is still looking to regain the form that made him PGA Tour Player of the Month in May.

14. Dustin Johnson: Johnson is playing well, having followed up a T-9 British Open finish with a T-19 performance at Firestone. His length off the tee will be an asset this week at the Ocean Course.

15. Bo Van Pelt: Van Pelt trails only Furyk in the standings among players without a win in 2012. His consistency has been noteworthy, though; no one has more than his eight top-10 finishes this year on Tour.