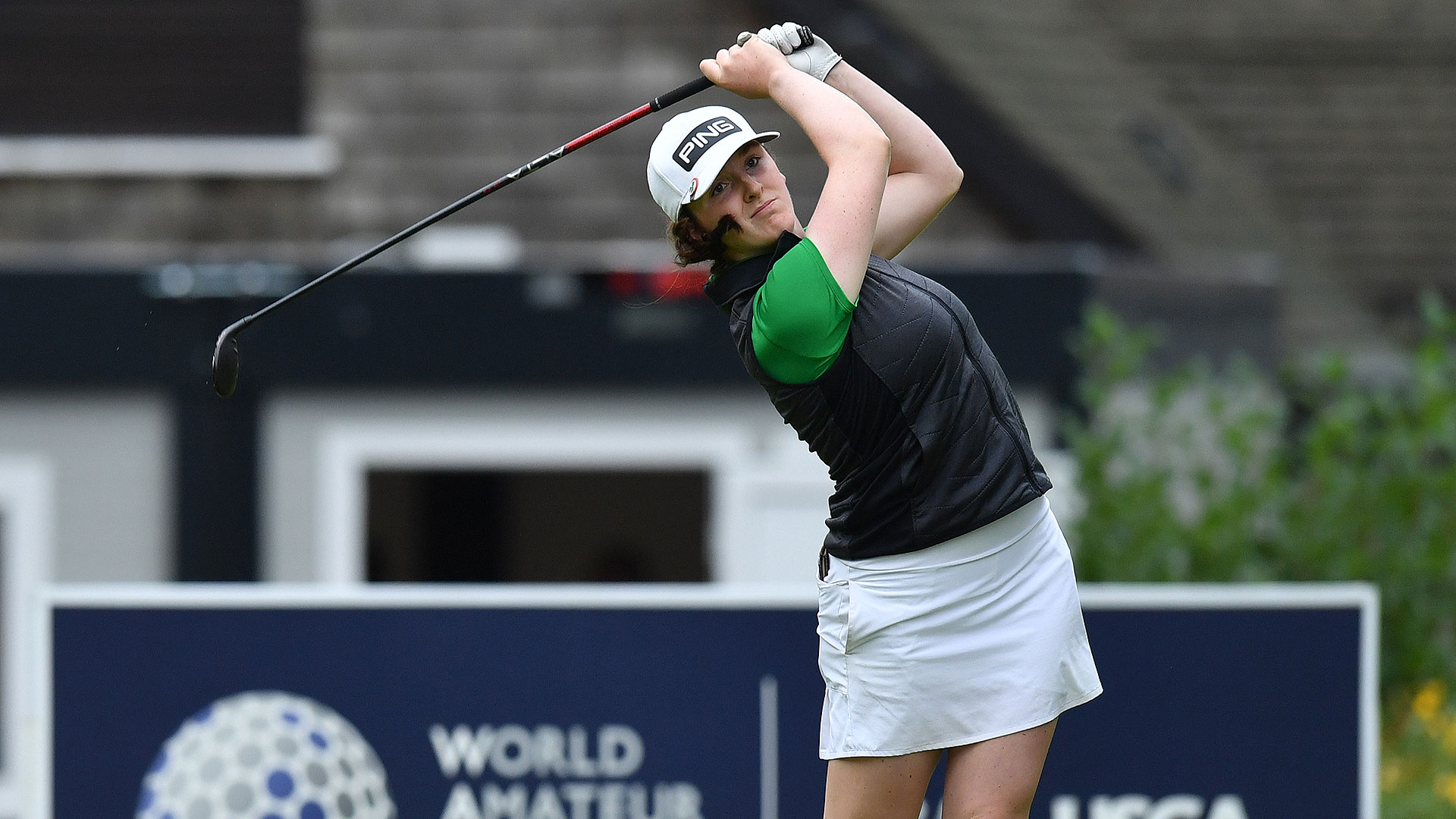 During the first week of April, Lauren Walsh deleted her social media. A sophomore at Wake Forest University, the golf facility was quiet with almost half of her team gone for the Augusta National Women’s Amateur. Ranked 40th on the World Amateur Golf Rankings at the time, she found it difficult to shake how close she’d come to qualifying.

Four months later, Walsh found herself living out one of her biggest dreams – playing in her first major – the AIG Women’s Open.

Her reaction? “It’s honestly mad (in a good way). The thought of playing in a major is still crazy to me,” she said while sitting beside her sister, Clodagh, who will caddie for her this week at Carnoustie in Scotland.

There’s nothing like the heartbreaks and triumphs of sports to make for inspiring storylines. Walsh had been positively trending in her game just before her heartbreak. When the ACC canceled its golf season in 2020 because of the COVID-19 pandemic, Walsh signed up for two individual tournaments – the Women’s Griffin Amateur and the Sunshine State Amateur – and won them back-to-back.

“They bumped up my rankings and put my name up there as one of the top GB&I players, and that set the tone going into the spring,” said Walsh, who started her season off hot with back-to-back runner-up finishes at the UCF Challenge and Palmetto Intercollegiate.

This meant Curtis Cup, the Arnold Palmer Cup and the Augusta National Women’s Amateur were all in the cards now.

Walsh knew qualifying for ANWA would be challenging. The top 30 Americans and top 30 internationals on WAGR received automatic picks into the field, but due to the tournament’s cancellation in 2020 because of the pandemic, players who were previously selected in ‘20 and remained amateur received an automatic invitation into the ‘21 tournament. Walsh hovered around the 40th-ranked amateur during selection times, but with half of the field already set and more internationals than Americans in the top of the world rankings, qualifying was uncertain.

“She found out the field was set when we were on our way to Champions Retreat,” said Kim Lewellen, head coach of Wake Forest’s women’s golf team.

The Augusta National Women’s Amateur starts its tournament at a neighboring golf course to ANGC, Champions Retreat. After two days of stroke play, the top 30 players qualify into the final round of the tournament, which is competed at Augusta National.

Coach Lewellen, who had three players qualify for ANWA (Swing Liu, Rachel Kuehn and Emilia Migliaccio), decided to drive the team down a day early before a collegiate event in March – the Valspar Augusta Invitational – to play Champion’s Retreat.

On the van ride to the course, Walsh stared at her phone. The field for the Augusta National Women’s Amateur was set and she was not going to play.

“In those situations, sometimes there’s nothing else to say but ‘this really sucks,’” said Lewellen, whose heart ached for her player. “It was also the worst timing possible to receive that kind of news.”

“While it was disappointing at the time, it did definitely sparked a fire and got me going,” said Walsh, who channeled every ounce of her pain, frustration and disappointment into her game. She played Champion’s Retreat with her team, using it as preparation for next year. She then placed top-15 at the Valspar event.

Three weeks later in early April, photos flooded Walsh’s Instagram feed with posts and stories from the Augusta National Women’s Amateur. She was on the range with Lewellen.

“I remember the day when you guys all got your invites and everything was all over Instagram. I turned it all off,” Walsh said. “I had a conversation with Kim and we both said, look, it's not to be this year but all I can do is push forward.”

Weeks felt like a heartbeat later and Walsh was selected for the Arnold Palmer Cup, named WGCA second team All-American and climbed to the top-ranked player from Great Britain and Ireland (GB&I) – status that earned her an automatic pick for the Curtis Cup and an email from the R&A.

“It was only after I re-read the email and thought, that says ‘Women’s Open.’ That doesn’t say final qualifier, Walsh recalled.

“So, I screen-shotted it and sent it to my dad,” texting him, “Wait does this mean I’m actually in The Open? And then kind of forgot about it,” she said, playing 18 holes with her GB&I team before checking her phone again.

“Then I got phone calls from my mom and dad saying, no, you’re actually in The Open.’’

And just like that, Walsh’s disappointment from months ago morphed into her most exhilarating dream.

“I was excited to try to qualify for it [The Open] for the first time and see what that experience was like,” said Walsh, “but then getting the text to say that I’m in the actual field was such a surprise. I had no idea.”

Her Women’s Open week gets more special because sister Clodagh – who plays golf at Maynooth University in Spain – will be on the bag.

“I’m lucky to have a competitive golfer as a sister,” said Lauren. “Nobody knows my personality and my game better than Clodagh.”

"Lauren’s away for so much of the year that we don’t get to spend that much time together,” said Clodagh.

The Walsh’s have a close-knit family and their younger brother, Edward, who turned 5 in January and adores his sisters, cannot wait to watch them at the Women’s Open. “To get to caddie for an event that’s so huge, it is kind of like a dream,” said Clodagh. “It seems so far away, and then all of a sudden you’re here and Lauren’s actually teeing it up with all the golfers that you watch on TV.”

Walsh tees off at 6:21 a.m. EDT on Thursday. “Having Clodagh on the bag, I know I’ll enjoy myself out there,” said Lauren, who played with Lexi Thompson in one of her practice rounds. “She [Clodagh] is the right person for me to relax.”

A year of battling through a pandemic, enduring painful setbacks and accomplishing things greater than imagined, Walsh learned a lesson that will pinpoint her back to this moment in years to come.

“You just don’t know what’s around the corner,” she said. “All you can do is take care of your practice and do what you can to get 1% better every day. That’s all you can do, and opportunities will follow.”