Hoey a late DQ after calling penalty on himself

KIAWAH ISLAND, S.C. – After an admirable display of honesty, one of the best rounds of the day Friday eventually turned into the first disqualification of the 94th PGA Championship.

One of only five players to break par during a windswept second round, Michael Hoey signed for a 2-under 70 and appeared to make his first career cut in a major, at 4-over 148. But later that night, some eight hours after completing his round, the 33-year-old alerted tournament officials that he had failed to recreate his lie after identifying his ball in a sandy area on the par-3 eighth hole on Kiawah Island’s Ocean Course.

The rules infraction called for a two-shot penalty, under Rule 12-1, but because Hoey signed for a number (70) lower than his actual score (72), he was disqualified. It was his first major-championship appearance in the U.S.

The Northern Irishman, a four-time winner on the European Tour, took to Twitter (@MichaelHoeyNI) to explain the situation: “Really pleased with today’s round, some of the best golf I’ve played. Unfortunately I made a small mistake on the 8th hole – removed some sand from an embedded ball to identify it as mine, didn’t replace the sand and should have incurred a penalty for not following procedure.

“I didn’t realize this until about 8:20 p.m. tonight after dinner when I went up to the club and chatted to the rules officials who then informed me that as I’d signed an incorrect card I’d be disqualified. I’m absolutely gutted, would have been the first cut I’d made at a Major.” 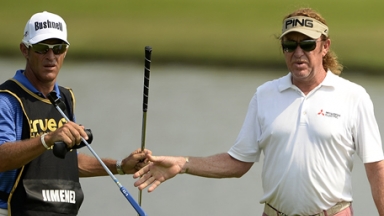 Jimenez holes out for eagle, three back in Thailand

MIguel Angel Jimenez eagled the par-4 ninth en route to a 5-under 67 to put him three back at the Thailand Classic. 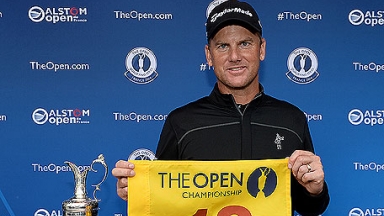 Robert Karlsson, Michael Hoey and Victor Riu qualified for the British Open through their placings in the French Open on Sunday.

Days after winning his fourth European Tour title at the Trophee Hassan II, Ulsterman Michael Hoey has decided to end his relationship with Horizon Sports Management.