Monday Scramble: Praise up for Tiger; play down for DJ 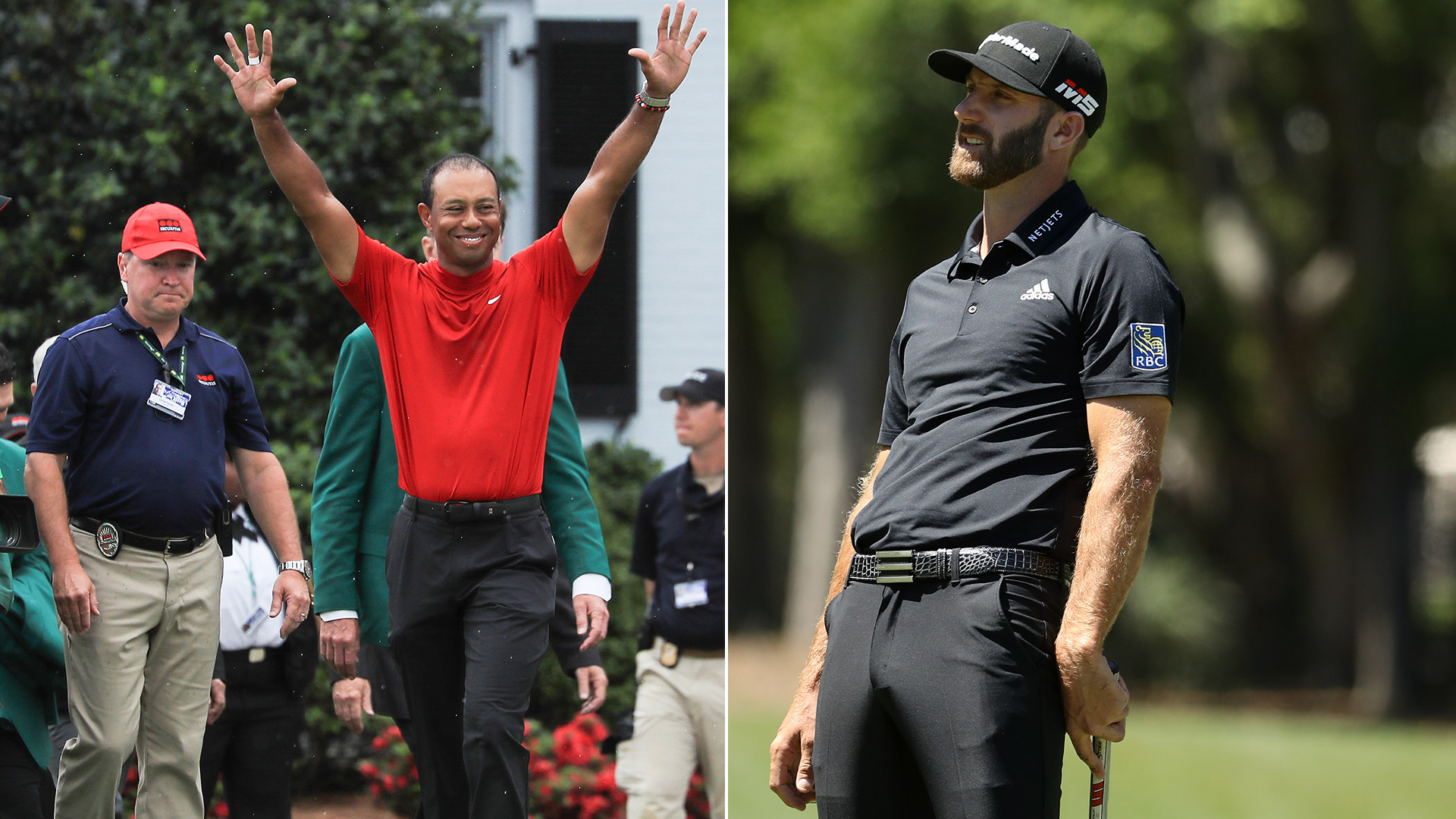 Tiger Woods praise and adoration continues, Dustin Johnson collapses, and Brooke Henderson puts her name among her country’s best. These stories and more in Monday Scramble.

Sunday in Clermont, Florida, a pastor began his sermon by saying everyone loves a great comeback and then referring to Tiger Woods “winning a big golf match for the first time in a long time.” Tiger hasn't had a greater effect on society than Buddha, as his late father once proclaimed he would, but he did get a mention alongside Jesus on Easter.

Woods didn’t play this past week and he didn’t do a media tour following his Masters win. In fact, all we saw was his posing for a social media post with a fan (patron – do we still need to say patron?) at his restaurant. But Woods was all anyone in the golf world and beyond could talk about. He’s not playing this week but is expected to compete in the Wells Fargo Championship – only 10 more sleeps! – and it will be interesting to see if he can bring the same intensity and focus he had at Augusta.

Fellow legend Michael Jordan called it the greatest comeback he’s ever seen. Let’s call it the second greatest, behind J.C.

1. Before we give the winner his due, let’s get this out of the way first: The hell, Dustin Johnson? The world No. 1 shot 77 in the final round of the RBC Heritage. It’s not like he was playing poorly entering the last stanza, as he held the 54-hole lead at Harbour Town. After a mundane, even-par front nine kept him in the mix, he shot 6-over 41 on the back (with a birdie at the last). This isn’t an anomaly:

2. And now for the winner. C.T. Pan beat overnight-leader Johnson by 10 shots on Sunday, shooting 67 to claim his first PGA Tour title. Following the win, Pan said he and his wife watched Tiger’s Masters performance on television last week and his wife told him, “Hey, I'm not patient, so you better get me [to Augusta] as soon as possible.''

Mission accomplished. ''Just listen to your wife,'' Pan said, ''and you will have a good life. She's right, always.''

3. Matt Kuchar earned his fourth top-2 finish of the season, closing in 67 to finish runner-up on Hilton Head Island. Kuchar has now earned almost $5.4 million in 13 starts, which would rank him 299th in official career PGA Tour earnings – one more good result from passing Jack Nicklaus’ career mark ($5.734 million). Kuchar’s career tally is a shade over $49 million, which now has him ninth all time.

4. This roller coaster Scramble hits another valley with Jordan Spieth, who shot 74-75 over the weekend to tie for 54th. It’s well-known that Spieth is winless on Tour since the 2017 Open, but he doesn’t have a top-10 on Tour since the ’18 edition. The numbers below show there is no easy fix:

5. Brooke Henderson successfully defended her title at the Lotte Championship in Hawaii, joining Sandra Post, Mike Weir and George Knudson as Canadians with eight wins on the LPGA or PGA tours. Who is the best ever from Canada?

Safe to say that Henderson, 21, will end any discussion of this question in the near future.

6. Lanto Griffin made huge strides in attaining his PGA Tour card for next season thanks to a four-hole playoff victory over Robby Shelton at the Robert Trent Jones Golf Trail Championship. Griffin, who moved to ninth on the Web.com Tour’s points list, credited Vijay Singh for giving him putting (yes, putting) advice last week at TPC Sawgrass.

“I was putting on the back green and Vijay yells out to me from 20 yards away and said, ‘Get your right elbow in tighter and bend over more,’” said Griffin. “Of course, I said, ‘Yes, sir,’ and he came over and helped me for a couple of minutes. … He told me after that to go win this week, so big shout out to him.”

Big shout out to his girlfriend, as well.

.@TheLanto61's girlfriend Maya flew in from North Carolina for final round @RTJCapitolHill

He had no idea she was coming.

She watched a few holes in hiding. Spent some time in clubhouse so he wouldn't see.

When he made playoff birdie to win, she ran onto green.#LiveUnderPar pic.twitter.com/ccQl4skqeJ

Henderson was having no part of the celebratory hula dance after her repeat Lotte victory. Yeah, it’s a little hokey. And, no, we’d want no part of doing that ourselves - unless we just made $300,000, then it's Napoleon Dynamite time.

Having More Fun Than You, DJ: Brooks Koepka continued his second job as an Instagram model, posting more mostly-naked photos of himself with girlfriend Jena Sims.

Majors and modeling, that’s what Koepka does!

Welcome Home?: Michelle Wie won the Lotte Championship in her home state of Hawaii in 2014, but shot 77-77 to miss the cut this year. Wie displayed visible pain in hitting shots with her surgically repaired right hand. She’s played two events since withdrawing from the HSBC in February because of “nerve entrapment” in her hand and has missed two cuts with a low score of 74.

Bigly Week for Trump: The president first tweeted out that he was going to give Tiger Woods the Medal of Freedom.

Spoke to @TigerWoods to congratulate him on the great victory he had in yesterday’s @TheMasters, & to inform him that because of his incredible Success & Comeback in Sports (Golf) and, more importantly, LIFE, I will be presenting him with the PRESIDENTIAL MEDAL OF FREEDOM!

And then there was a photo on one of his courses with Lexi Thompson and Rush Limbaugh.

No Money Now, But Soon: Akshay Bhatia Monday qualified for the Web.com Tour’s RTJ event. The 17-year-old amateur standout, who will forgo college for the pros, made the cut and tied for 41st.

College Days: It was a big week for college golf, as the Western Intercollegiate, won by Stanford, was televised for three days on Golf Channel. It was also conference championship time. Click here for Brentley Romine’s conference roundup.

Blown Fantasy Pick: Jim Furyk. Had been playing well and seemed to be a solid pick at a course like this. Seemed to be. He missed the cut. Sigh. 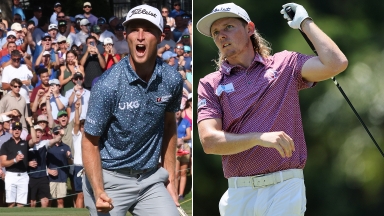 Will Zalatoris survived a dramatic playoff to win his first PGA Tour event while Cam Smith endured a drama-filled week. 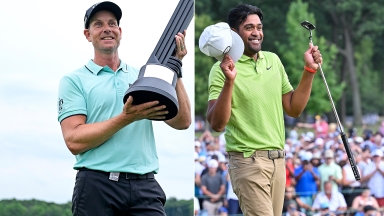 Monday Scramble: One for the money, two for the show

Henrik Stenson and Tony Finau both won on Sunday, but each had significantly different meanings. 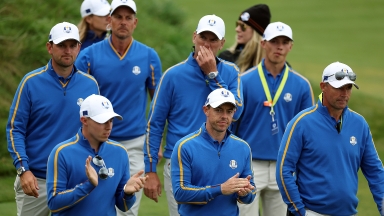 Why there is reason for optimism for Team Europe, as well as a look at Tony Finau's and Brooke Henderson's wins.